Thanks to Martin Jump for the excellent and appropriate header image for this post about the Stonechat. It is the view looking NE from Hawthornthwaite Fell to the eastern edge below Ward's Stone, with Mallowdale Fell taking centre stage.

I was in touch with John Callion regarding the 'Ward's Stone Chat', to ask if he had any wintering records for Cumbria that might dispel my claim that this was the highest altitude bird in our area if not England. If John didn't have the answer to this question, nobody else would....

'Many of the Stonechats that breed in the high fells tend to nest in the steep angular valleys that,  after the autumn and the onset of the low arc of the sun, become sunless and unsuitable for survival during the winter.

There are however some of the wider and shallow valleys that offer 'full sun' during the winter and retain territorial birds; to my knowledge they include the upper Mosedale valley near Skiddaw House, and upper Borrowdale at Dock Tarn. Both of these sites are around 400m asl, so not as high as the one you have in Bowland. There may be others, perhaps higher, but l have no knowledge of them, so l think it's fairly safe for you to suggest your bird is likely to be the highest that we have information for?' John Callion. 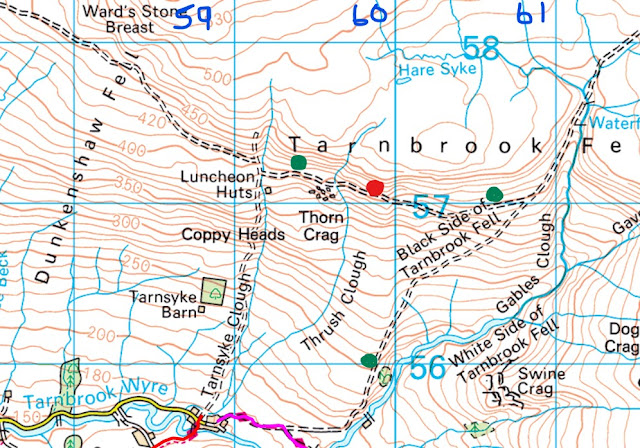 Map Courtesy of Simon Hawtin
During the summer, keen fell runner Simon had seen two Stonechat (Green) in the same area as the January Ward's Stone bird (Red), one of which may well have been a female to the male, thereby making an excellent 420m wintering pair. Perhaps if Simon can find a pair in the shadow of Ward's Stone on Tarnbrook Fell during this winter, we can then put an end to conjecture. 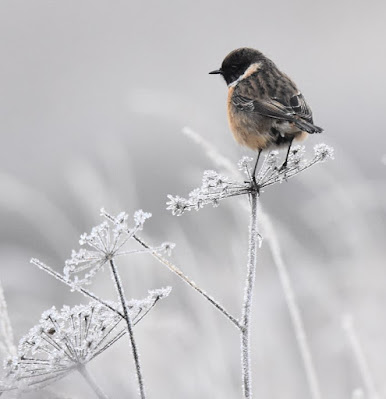 Stonechat Male. D.G.M'cGrath
Since 1 January, to date I've noted 35 Stonechats, recorded at 18 locations and mainly found on the FBC website, including an excellent 6 Stonechat at Lytham Moss 3 January. You just don't usually see six Stonechat at any one time in winter, and certainly not lowland/coastal birds. Thanks to Dave for this little beauty he found at Marton Mere.

View Full Screen
I've previously paid little or no attention to the Wood Mouse - sometimes referred to as Long Tailed Field Mouse - and had no idea it was probably the most common mammal in the UK.
From the B+W File. 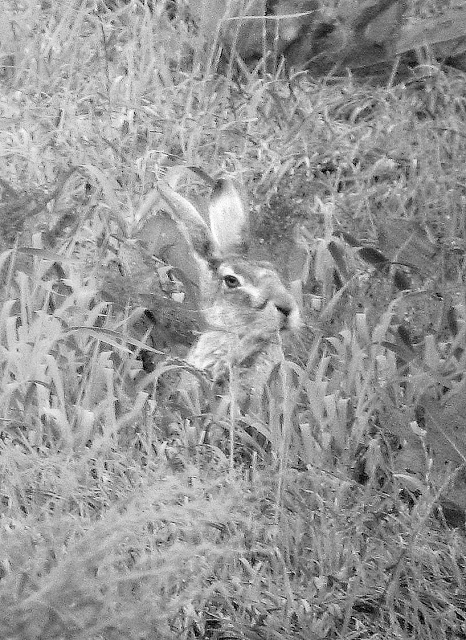 Brown Hare in the long grass at Cockersand....Well, being I took the photograph, where else!
Posted by Pete Woodruff at 13:17 3 comments:

Ward's Stone is the highest peak in the Forest of Bowland, the trig point stands at 560m. An interesting fact about Ward's Stone, is that another 50m would make it a mountain to join the only other two in Lancashire, Green Hill at 628m, and Cragareth at 627m.

Last Wednesday saw the report of a male Stonechat on Ward's Stone on 6 January. 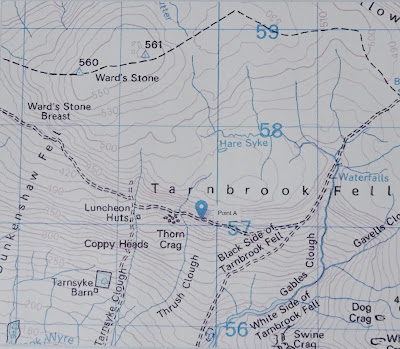 But checking the grid reference given in the report, I found the sighting of the Stonechat had been at around 420m which gives the record to be on Tarnbrook Fell and not quite the high altitude record as at first thought. However, I have noted this to be the highest altitude of a wintering Stonechat recorded to date in England this winter....ever in my little black book.
I never went any higher than 400m during my years of observations of the Stonechat on Clougha Pike where I found Stonechat breeding at that altitude, but never recorded a wintering bird.
Of note, the highest altitude record for breeding Stonechat in the UK stands at 590m in Cumbria in 1996....(J.Callion) Stonechats. A Guide to the Genus Saxicola. Christopher Helm 2002.
Obituary.
I was sorry to hear Peter Cook had died on 5 January.
Unknown to me at the time, his love for the Stonechat started at an early age, he had developed an interest in birds at the age of 12. Peter was watching Stonechats, and found some nesting on Heysham Barrows, but went on to write in an article for the LDBWS Annual Report, that he was disappointed they were no longer a regular breeding bird in coastal areas in the area, including Heysham.
Peter took on the role of Secretary for the LDBWS in 2012, where he remained until his death. The Society and birders will miss his presence, and I would like to add my personal sadness at the news of Peter Cook's passing.
From the B+W File. 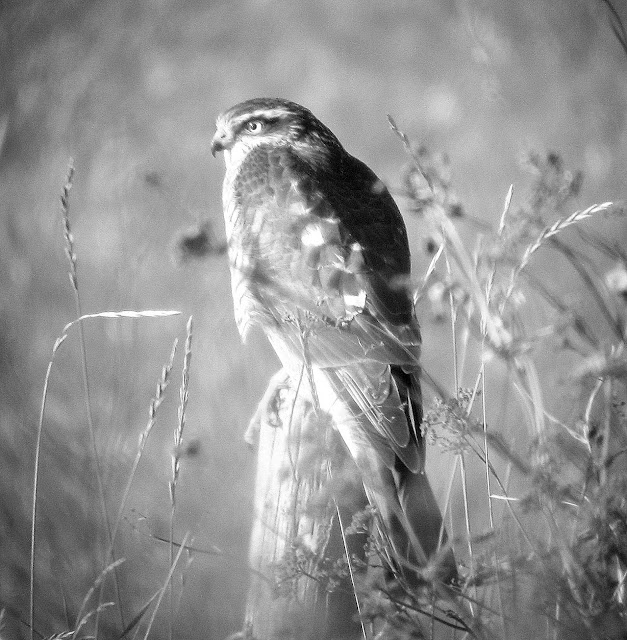 I managed to stalk this Sparrowhawk down to 50m at Cockersand in September 2015.
Thanks to Ana Minguez for the delightful Penduline Tit header....Couldn't resist it.
Posted by Pete Woodruff at 17:04 6 comments:

We had a Song Thrush yesterday, a mega in the garden with Nectar Points equal to a White's Thrush on the Scillies as far as I'm concerned, but....

....it beat the snow which came down today.

I haven't been to Cockersand in a while now, but I met this disgruntled up and coming birder one day last autumn, he had a good old whinge about being told Cockersand was the best place to find a Yellow-browed Warbler and was a bit miffed he hadn't done after several days on the hunt, I could tell he wasn't happy....so I told him he'd been mislead and should make haste to the Heysham/Sunderland area where YBW finders abound!!

A day without a smile is a day in your life wasted.

Made my first venture out on Sunday, into the pandemic wracked world of 2021. A walk in pleasant sun along the promenade with KT, from Sandylands to Half Moon Bay and return, to have two enjoyable birding experiences along the way.

At least 2,000 Knot had assembled on the beach by the Sunny Slopes groyne.

View Full Screen
It was an absolute delight watching these birds, the pleasure only dampened by someone with a large black unleashed mutt, both charging across the beach to the groyne to disturb every bird in sight. What annoyed me most about this unacceptable behaviour, was the fact his attitude was that it was always his intention to set the mutt off ahead of him to put the birds to flight and ruin everyone's enjoyment of the spectacle being observed by a small group of people.
Edit.
If you have already read this post, you will see that I have edited it to remove some unacceptable language used in my account of this appalling act of disturbance of birds in Morecambe Bay.
But I found a little relaxation at Half Moon Bay, with a view of the Lakeland mountains across Morecambe Bay.
View Full Screen
On the return leg I found a Black-headed Gull in an inland field off the promenade. 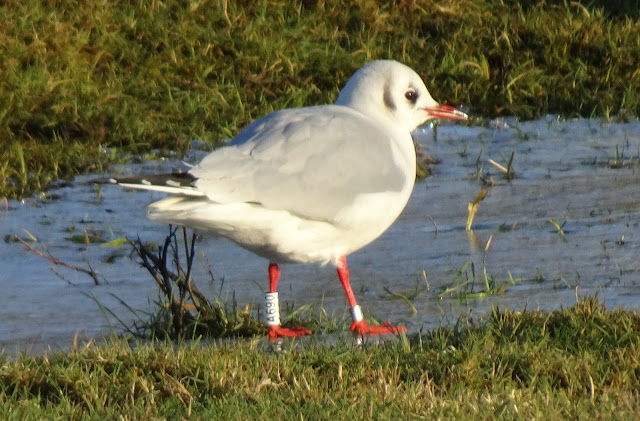 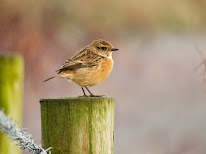