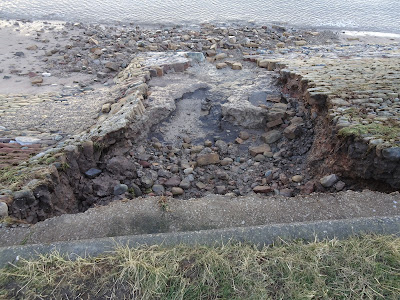 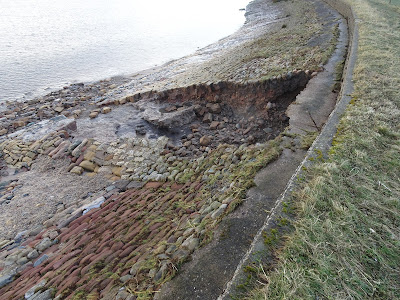 Storm Ciara combined with a high tide was responsible for some serious damage to a couple of sections of the sea wall at Cockersand. It's my understanding that Natural England takes no responsibility of maintaining this sea defence any longer....So what's new about Natural England then!

On the Lune Estuary, with higher numbers than last Friday, at least 3,500 godwit were making life hard again, mingling above and below the Conder Estuary, 2,500 Black-tailed Godwit, and 1,000 Bar-tailed Godwit were my final estimates. Also noted, 3 Goldeneye, 5 Goosander, and 550 Wigeon. On the canal basin, 14 Goldeneye and Black-headed Gull 6CY seen here again for my fourth sighting since the first on 26 September 2014, all on the Lune Estuary.

At Cockersand, the male Stonechat showed briefly in the rough field behind Lower Bank House, 5 Rock Pipit were pushed off the marsh by the tide, with 3 Reed Bunting seen. In the field behind Lighthouse Cottage, up to 40 Twite were flighty, with at least 15 Pied Wagtail. From Slack Lane I saw a flight of c.900 Golden Plover undecided where to make landfall. Off Plover Scar, 10 Eider follows 8 seen here on 3 September 2019, and was only my second record off the scar at Cockersand since 3 on 18 May 2019. 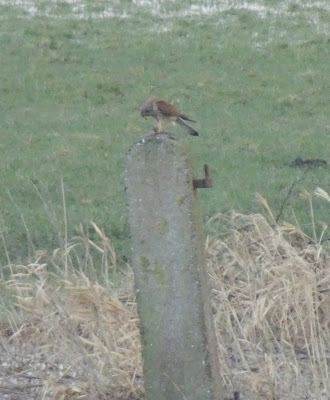 Two Kestrel seen, one at Bank Houses, and one at Slack Lane, where I think this one had just reduced the Twite number to 39, a few minutes earlier it had been surveying the landscape from the telephone wires above the field.

There are currently in excess of 400 birds in the Thurnham/Cockersand area. In addition to the 28 on Conder Pool. On Jeremy Lane, 45 Whooper Swan were accompanied by 8 Bewick's Swan and 132 Mute Swan, and Whooper Swans were strung out in fields between Thursland Hill and through towards Bank End.
Posted by Pete Woodruff at 10:53