Apologies for yet another title lacking originality.

Members of the FDL - Farmers Defence League -  can relax, the pic isn't there to criticise what the farmer's up to, but to illustrate the grass cutting at Cockersands on Thursday which attracted at least 300 Swallows over the field feeding on the insect bonanza. 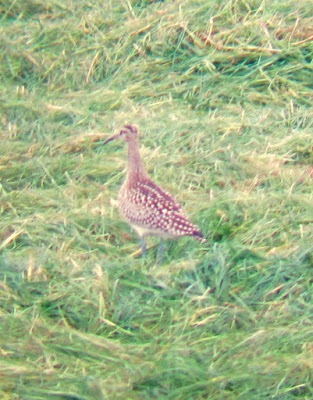 The Whimbrel - in the poor quality pic above - and 3 Brown Hare were in the same grass cut field when I returned there later in the afternoon.

I watched a Wheatear flying a foot above the water, the bird appeared to be heading west out to sea towards Pilling. Later 16 Canada Geese came in off the sea and flew inland, and a Great Crested Grebe was off Plover Scar which was disappointingly completely void of birds at high tide. 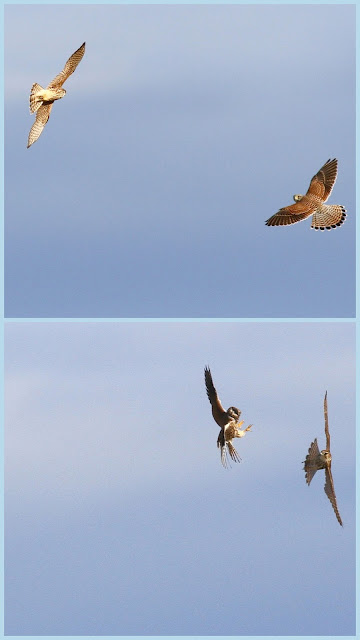 Earlier the same day at Cockersands, SP had excellent views of a Merlin and Kestrel in ariel conflict and took full advantage of the situation with the camera to achieve some excellent results.

On Jeremy Lane, 12 Goldfinch and 4 Small Tortoiseshell, and at Glasson Dock on the Lune Estuary, a Mediterranean Gull was with c.250 mainly Black-headed Gull, 13 Little Egret counted, c.250 Golden Plover, with 6 Wigeon a sign of the approaching winter.

Best bird a Conder Green was a juvenile Ruff in the creeks, with 2 Common Sandpiper, c.40 Redshank, with a similar number of 40 Teal noted. 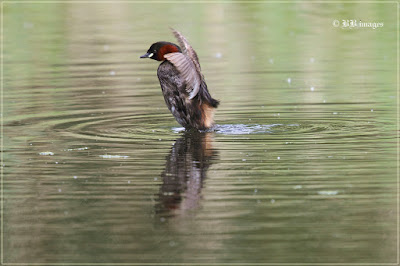 On Conder Pool, an increase by one with 5 Little Grebe seen today, this is the peak count since I found two had returned to the pool on 28 July. Last years figures in excess of today's count for Little Grebe on Conder Pool were....7 on 26 August, and 10 on 1 September.

Thanks to BB for his brilliant 'walking on water' Little Grebe.
Posted by Pete Woodruff at 11:25

Hi Pete, how are you? .. Beautiful cover for the blog .. Very nice composition ..
You know ?? Today I take nice photos of Whinchat on a wild rose .. I'm happy .. Now they are passing .. Hugs

Ana....If you've seen a Whinchat and took a photograph of the bird, I'm even happy too, hope to see it sometime soon.

Thank you for looking in again, have a great week.