The last time I was on Clougha was 4 April 2017. There was a time when I would never had thought I'd be saying it was over 13 months since I last went up Clougha, and I had to search my records to see I never checked out the area last year for breeding Stonechat after the April visit. But yesterdays evidence suggests I missed nothing, as I came away empty handed after a three hour survey, and it looks like a second successive year of no Stonechat on Clougha....All a bit depressing.

It was 2hrs 45minutes after I left the car park on Rigg Lane that I found the first of 3 Stonechat on Birk Bank, a male at the west end, and a pair at the east end, so I reckon 2 pairs on here today. 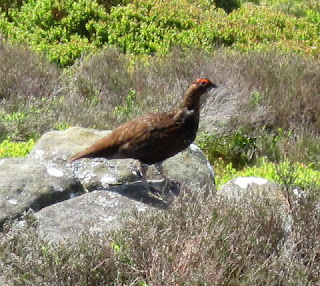 Fourteen species noted in six hours on Clougha/Birk Bank included, a lone Red Grouse which was the only one seen, and took me 1hr 30 minutes to find, 14 Meadow Pipit was a low count comparable to the recent equally low counts of 19 on Hawthornthwaite (West), and 11 on Hawthornthwaite (East) 18 April, and only 11 seen on Harrisend 8 May. Two singing Garden Warbler were seen as the best birds of the day, 13 Willow Warbler, 2 Song Thrush, 2 Mistle Thrush, 2 Tree Pipit, and a lone male Linnet. Raptors seen, 5 Buzzard, and 2 Kestrel one of which flew by me with small prey in it's talons. 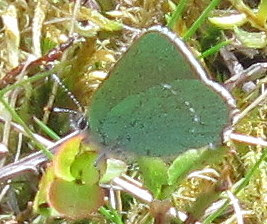 Butterflies seen, a lone Green Hairstreak, surely more, perhaps I wasn't trying, 7 Orange Tip including a male in pursuit of a female on the wing, probably up to 80 Large White, and a similar number of up to 80 Latticed Heath moths seen....Two visits to Birk Bank bog six hours apart saw it lifeless.
Posted by Pete Woodruff at 10:42