As Good As It Gets.

I had an excellent day between Marshaw and east of Trough Bridge to log 26 species yesterday. Not a mega number of species counted, but a good reflection of birds to be expected seen at this location. With some species missing, notably Redstart and Dipper not seen, but otherwise as good as it gets in Bowland. 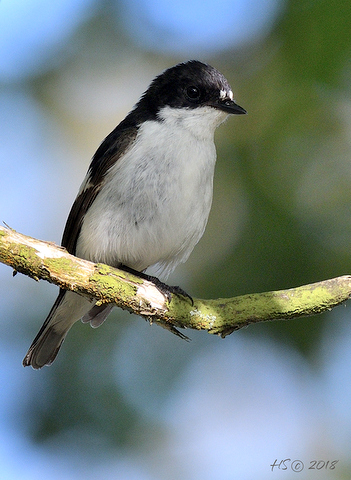 Two Pied Flycatcher were seen as a male with female probably sitting in a nest box, and a female, singing male Blackcap, Garden Warbler and probably up to 12 Willow Warbler. House Martin are nesting at Tower Lodge with Swallow present, 9 Robin, 5 Mistle Thrush and 2 Song Thrush, with Siskin and Lesser Redpoll seen and at least singles of Long-tailed Tit, Coal Tit and Nuthatch.

Six Spotted Flycatcher maintained the reputation of being the best location in our recording area for the species, 4 Common Sandpiper and 5 Grey Wagtail were on the Marshaw Wyre, and a Cuckoo called on and off all afternoon along the woodland strip above Tower Lodge. With a good number of 'whites' seen, 2 Orange Tip were the only other butterflies seen.

Thanks to Howard for his excellent images of the Bowland Flycatchers.
Posted by Pete Woodruff at 12:06