Today was a complete disaster for me, when the last chance for birding in 2020 was thwarted for more reasons than one. But here are some bits and pieces to fill the page....
I found a file buried beneath a mountain of other files, it contained a good number of black and white images that I submitted over a couple of years, to a photographic website appropriately named 'The World In Black & White'.
So I decided to feature one or two in some forthcoming posts on B2B. The first is in the header, not all that original in it's title I must confess. The pictures are only loosely connected with birds and birding, some not connected at all perhaps.
The occasional Wren visited our garden yesterday. I happened to be looking through the kitchen window when it appeared, and having my camera to hand managed a bit of footage of the delightful little creature offering us a moment of pleasure.
View Full Screen
I'm thinking of taking up a bit of birdwatching as a pastime next year. Meanwhile, to all B2B enthusiasts....
Conder Green. Pete Woodruff. View Full Screen
A VERY HAPPY NEW YEAR
Posted by Pete Woodruff at 18:47 4 comments: 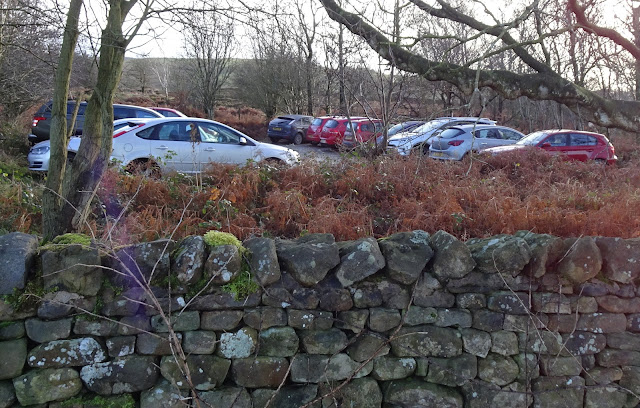 It was a full house at the car park on Rigg Lane on Tuesday. One family group told me they were just glad to be out of the house for a while. For me it was much the same, but with the added pleasure of finding 4 Stonechat at Birk Bank today, by coincidence the same count as my visit here on 16 October, though not necessarily being the same birds again. 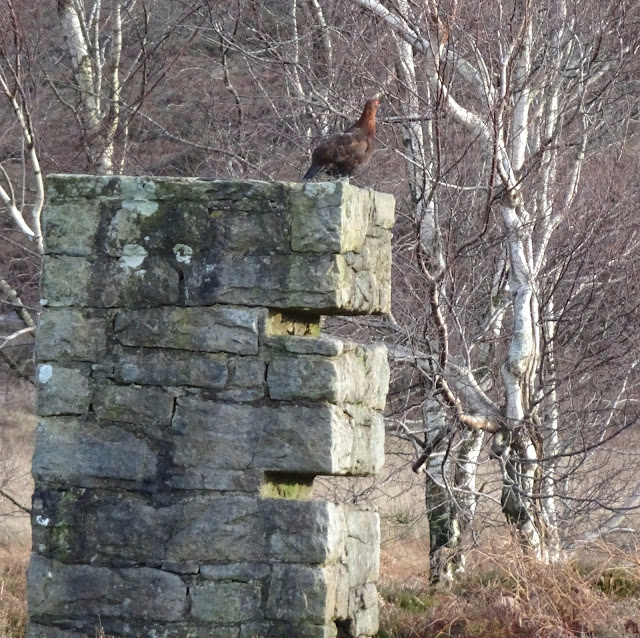 Along the way I saw 8 Red Grouse, but this image is more to highlight the limestone structure than the bird, it's alcoves and why it stands alone puzzles me. The only other birds encountered, 2 Goldcrest and a Robin. A Buzzard gave me an excellent photo opportunity had I stopped the car, it was perched on a fencepost  as I drove approaching Quernmore. 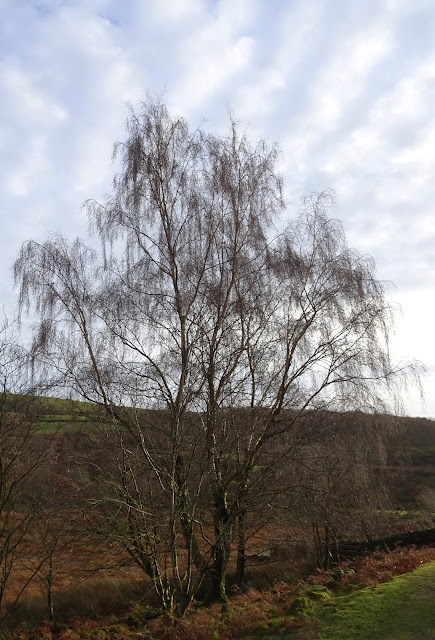 The Silver Birch trees made attractive silhouette patterns in the late afternoon light....

....and spending a few minutes on the boardwalk around the bog gave the pleasure of reminding me of summer months, when I found the Keeled Skimmer at Birk Bank for my fourth year.
View Full Screen
Thanks to Howard Stockdale for sending me an appropriate seasonal image of the Sanderling, one of my most favourite waders for a Christmas header.
View Full Screen
Posted by Pete Woodruff at 15:03 4 comments:

....well badly fractured anyway!
I had to taxi a family member to Dolphinholme on Tuesday, to be picked up again in three hours to return to Lancaster. The perfect opportunity for me to go a few miles up the road for a couple of hours to Hawthornthwaite, to prove that I had missed the Stonechats wintering here on my last visit 10 November.
The trip wasn't the success I had hoped for as I had made the effort to make a video of the visit, but when I got the sequences on my computer, I found the wind had drowned out most of the commentary, and three of the sequences ended up in the bin. However, I salvaged the three remaining sequences, and made a little sense of them.
Three species are mentioned in the footage, a pair of Stonechat, a Merlin, and a Hen Harrier. Two species not recorded, 12 Red Grouse, and a Wren.
View Full Screen
I note a Common Sandpiper reported at Conder Green Friday 18 December (LDBWS). This is the first Common Sandpiper to be recorded at Conder Green in winter since the last sighting of a long wintering bird of the species on 11 October 2019. Another wintering Common Sandpiper was found at Skerton Weir 25 November, was probably the same individual seen two days later from Carlisle Bridge 27 November.
An ID puzzle was these eight footprints found in the mud on the bank of the River Lune in Lancaster. I more or less immediately thought Otter, but me thinks too small....Perhaps Stoat? 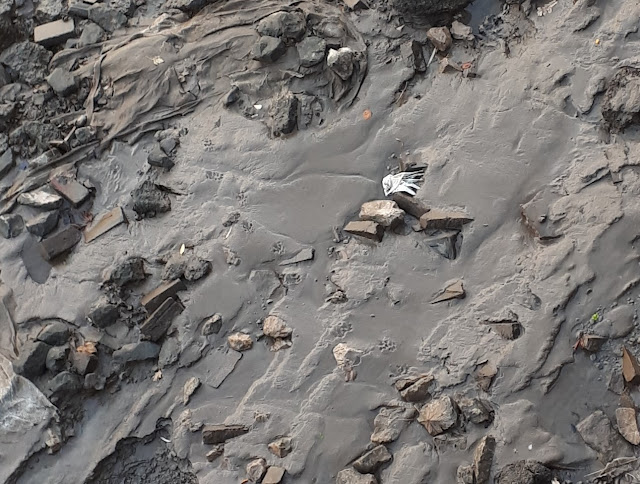 A Little Success.
It was great to hear about the success of breeding Little Tern at Blakeney Point off the coast of Norfolk, where the terns had their most successful season in 2020, fledging in excess of 200 chicks, and being the best result for more than 25 years. 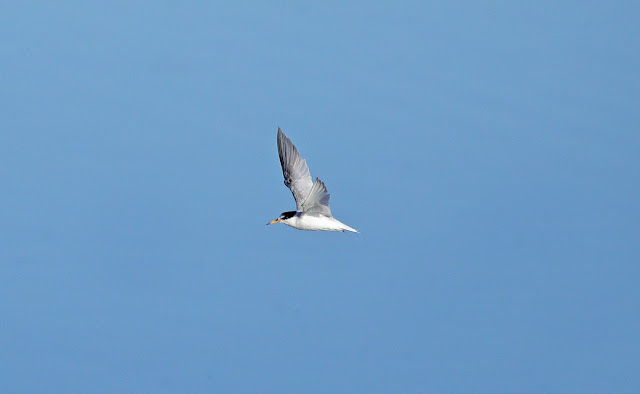 Little Tern. Martin Jump.
The Little Tern is one of the UK's rarest seabirds, and has been in serious decline nationally for up to 40 years since the 1980's, it's status in the country stands at less than 2,000 pairs, with up to 155 pairs nesting at Blakeney Point this year.

This wonderful good news story is believed in part, to be the result of fewer homo sapiens visiting this location earlier in the breeding season during the first national lockdown, due to the terrible pandemic which is currently a world-wide scourge. Another contribution is that the Little Tern chose to nest at the far end of the point this year, further away from the mainland, with fewer visitors deciding not to go to the trouble of walking the distance. Added to this, is the fact that the birds nested in a tight group, with fewer predator's affecting the terns this year too, seeming to add credence to the strategy of 'safety in numbers'.

As a rapidly declining species, what a sight it must have been to see so many of these tiny seabirds fledging the nest as creatures still very much at risk in a year that has - and still is - a challenge to us all.

Thanks to Martin Jump for his image of the Little Tern that made a brief appearance at Preston Dock in July 2018.

So there's going to have to be some diversions on B2B, 'cos I ain't getting out as much as I can and would like to. Monday's visit to Heysham was on a brilliant day weather-wise, wall to wall sunshine and a flat calm sea, but didn't bear much fruit. 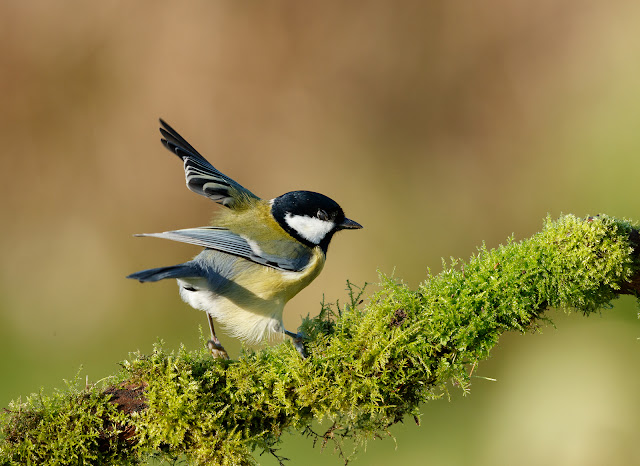 But I was thankful for small mercies, with a wander along the seawall and foreshore to Ocean Edge salt marsh. Bird of the day in my book was a Song Thrush, not seen daily by any means, and a bird the conservation status of which is in the Red. Other birds to note, Dunnock, Wren, and Great Tit.

A Peregrine Falcon showed perched high on the power station, which prompts a word of caution to birders tempted to poke a camera through the fence at anything within the grounds....DON'T! 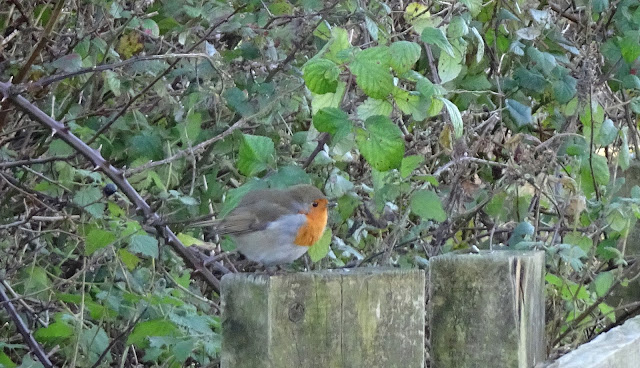 By the time I got back to the car I'd seen 6 Robin, including this one that kept returning to see me by the car as I drank my coffee and biscuits.
The sunset at Heysham was stunning, as seen by the children's play area off Knowleys Road, creating a scene of peace and tranquility.
Full Screen Full Volume
Gold & Green.
A treat recently in our urban garden, was one of our regular Goldfinch feeding opposite a Greenfinch which is at best scarce and irregular.
View Full Screen
Thanks to Martin for helping to salvage B2B with his header and Great Tit image.
Posted by Pete Woodruff at 12:34 2 comments:

Though the weather wasn't all that pleasant on Tuesday, having scrounged a lift to Galgate, I did have a enjoyable ramble along the canal from Galgate back to Lancaster, about 4 mile in as many hours at a snails pace. 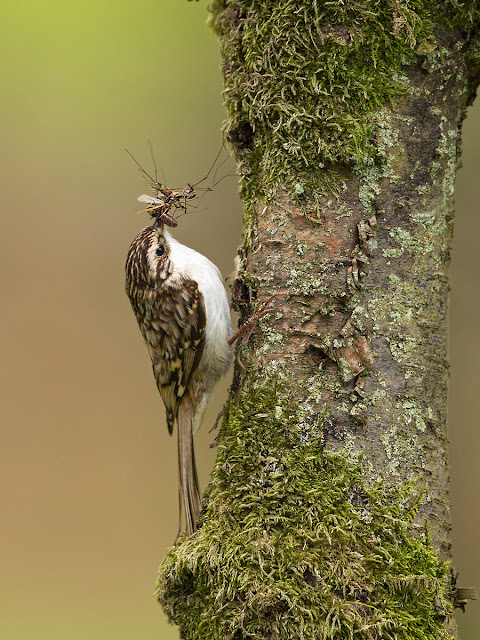 Treecreeper. Martin Jump.
Along the way, it was a toss up for bird of the day, between the small mouse-like Treecreeper, with it's long miniature Curlew-like decurved bill, and doing what it does best as the tree-trunk and branch-climbing passerine, and the 3 Goldcrest seen. Best in number was the count of at least 22 Blackbird, with 5 Robin seen, a Wren, Blue Tit, Great Tit, and Chaffinch. A Buzzard flew treetop height over the canal, and a Cormorant over south.

I've noted the Little Grebe have failed to return to winter on Conder Pool in anything like the numbers of previous years. I think the best count to date has been 8 Little Grebe, which compares to a personal peak count of 22 last year on Conder Pool 18 December.

Also failing to return to Conder Green this winter is a Common Sandpiper, one of which wintered for 11 consecutive years until last recorded here in 2018. But I've not seen a wintering Common Sandpiper, nor seen any reports from here since my last sighting on 11 October 2019.

Until 1,000 had been reported at Cockersand yesterday Saturday 5 December, the Golden Plover had so far been absent in number from the Lune Estuary to date, counts had only been at around 500. My last combined peak count was of c.3,350 Golden Plover at Glasson/Cockersand on 16 December 2019, probably representing the entire Lune Estuary population at the time. A notable comment on the LDBWS sightings page from one regular Lune Estuary birder last Sunday 29 October....'Didn't see a single Golden Plover'. 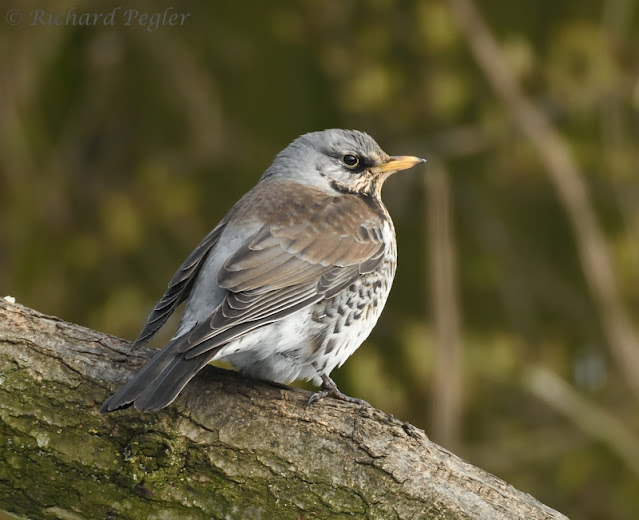 Another two interesting December records from 2019, was of at least 1,000 Fieldfare seen in the Conder Green/Cockersand area on 16 December. The following day, Fieldfare with Redwing were in view for the length of the walk Aldcliffe to Glasson on 17 December, amounting to 1,200 individuals by the time I got to Glasson Dock. Also seen on the walk 92 Blackbird...Impressive stuff.

The recent 'Videos won't play on B2B' issue has been fixed. I'd like to publicly thank Blogger for resolving this problem.

Thanks to Brian, Martin and Richard for some excellent images.