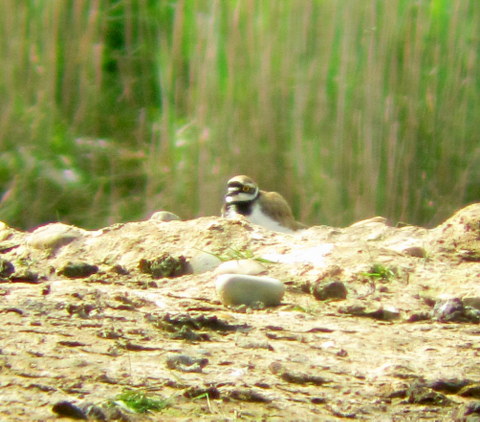 I caught up with one of the Little Ringed Plover on Conder Pool yesterday, although it didn't play the game for a pik for me, two birds observed in display flight on Sunday (Ian Hartley).

Neither did the c.50 Black-tailed Godwit play ball, and didn't reveal themselves until a mass departure with just about every other bird on the pool caused by an unknown, when they flew off towards the estuary. Five Avocet were also on the pool with a Greenshank, and a Sedge Warbler gave brief song in the reeds upstream from the road bridge. Downstream in the channel from the iron bridge, 12 Black-tailed Godwit, with a Whitethroat from the coastal path.

At Cockersand, 7 Eider off Plover Scar, a Wheatear, the ever present Skylark singing it's everlasting flight song, and a Kestrel. I saw only 9 Swallow in 5 hours today. Butterflies noted, 4 Green-veined White, 3 Peacock, a Speckled Wood, and 9 Orange Tip, one of which was in our garden.
Posted by Pete Woodruff at 20:00 No comments:

Little And Not Very Often....

....but it was good to see the hirundines showing some sign of a return, with House Martins seen at River Winds, and Swallows at Conder Green Farm, Gardners Farm on Moss Lane, and Bank Houses at Cockersand, though not a double figure in total.

Six Avocet were seen as four on Conder Pool and two in the creeks. A Whitethroat seen from the coastal path, and 22 Black-tailed Godwit downstream from the iron bridge. I found my first Cockersand Wheatear, and having deserted the fields around Abbey Farm and numbering at least 500 during April, 12 Golden Plover appeared to be the last remaining remnants in flight over Lighthouse Cottage.

Thanks to Brain Rafferty for his Whimbrel header image, discovered coming to roost at the new Grimsargh Wetlands.
Posted by Pete Woodruff at 11:50 1 comment:

Another walk on Sunday produced 4 Blackcap, two of which were a male and female from the woodland trail at Lancaster University, and another in full song which gave excellent views.

The song of the male Blackcap runs equal with that of the Nightingale, as the best songbirds to be heard in the UK.

Also seen, 6 Willow Warbler, 5 Chiffchaff, 2 Jay, and 2 Mistle Thrush one being on the woodland tail where a Nuthatch seen, and my first of the year Orange Tip, and 2 Speckled Wood.

Yesterday Mike wanted to accompany me on a visit to Harrisend and Hawthornthwaite, but needed to be back home by 12.30pm, so off we went to get on Harrisend by 8.30am. I'll avoid any drama, other than to say the morning was a disaster, in that we found not one Stonechat on either of the fells, although the visit to the latter was much briefer than I would have liked. My best contact for Stonechat tells me in an e-mail, that despite being in Bowland every weekend since mid-February, he saw his first bird yesterday up Langden.

On Harrisend, a good number of Willow Warbler, especially around the old Hawthorn surrounded by gorse where there was a highly mobile up to six birds. Also at least 20 Meadow Pipit, a male Reed Bunting, a Snipe in flight, 5 Red Grouse, and we may have heard/seen 3 Curlew.

On Hawthornthwaite, a smart male Wheatear, 12 Meadow Pipit, 4 Red Grouse, a Redshank, and Curlew. A lone Swallow seen as we passed Yates's Farm.....Where are all the Swallows? 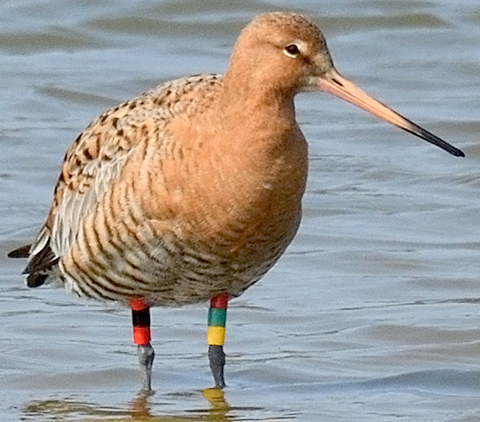 A Black-tailed Godwit colour marked RGY - RNR was seen at Leighton Moss RSPB Reserve on 17 April. I'm grateful to Howard Stockdale for the excellent image of the bird, and to Pete Potts for the history following my submitting it to him.

With the exception of 9 sightings, it was seen and recorded nowhere else other than 85 times in Kent, and has a history as long as your arm. Here condensed....

The Buzz Is Back.

A little more interest and movement at Conder Green on Wednesday than I had experienced on Monday, not least because I found 8 Wheatear in a ploughed field north of the picnic area at Conder Green, they were accompanied by 4 White Wagtail, 28 Black-tailed Godwit were feeding close in on the shore seen from here. 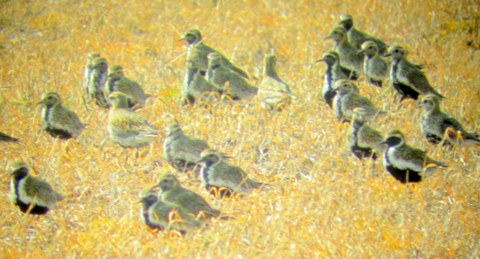 At least 220 Golden Plover and a White Wagtail were in the field behind Lighthouse Cottage again. I took great pleasure in spending 30 minutes looking through these birds, perhaps I might see a Dotterel with them, based on finding one with 275 Golden Plover in a field close by at Abbey Farm, albeit 6 years ago on 16 April 2013, and five Dotterel seen in the same field I was at today on 8 May 2015 (Stuart Piner).

In a recent conversation I was reminded that my long lost friend and mentor John Leedal and I had found a specimen of Sand Leek Allium scorodoprasum on the banking at the edge of the marsh north of Conder Green. 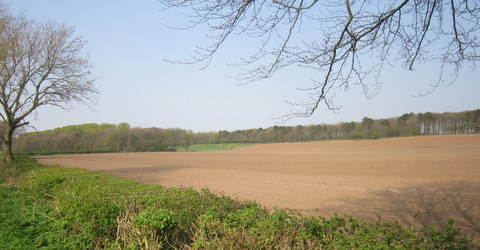 It was because I went to search the area of the marsh for the Sand Leek that I found the Wheatear in this field....Thanks John, It was good my buzz returned today too.
Posted by Pete Woodruff at 10:54 2 comments:

The Lune Estuary gave the impression it was closed on Monday, with sightings at a premium, and not for want of time and effort, although....

Three Common Sandpiper had arrived at Conder Green, a lone Black-tailed Godwit was in the creeks, and 2 Avocet appear to have settled in on Conder Pool. A few Swallow and Sand Martin were high over the canal basin at Glasson Dock, and 2 Stock Dove on Jeremy Lane.

A male Merlin drifted past me a few metres below the headland at Cockersand before veering left over the field by the abbey and out of sight. A White Wagtail and 48 Golden Plover behind the Lighthouse Cottage, in an image showing classic lack of Woodruff photographic skills. 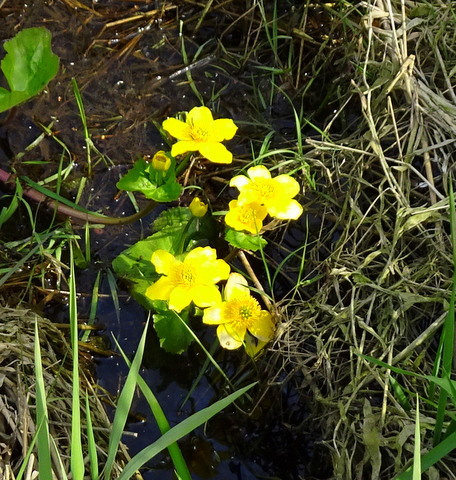 I found the Marsh Marigold in a ditch at Cockersand whilst looking through the Golden Plover on Monday. A common and widespread flower, though I've seen it nowhere else at Cockersand - maybe I've not tried hard enough - it has protection status.
Posted by Pete Woodruff at 10:41 1 comment: 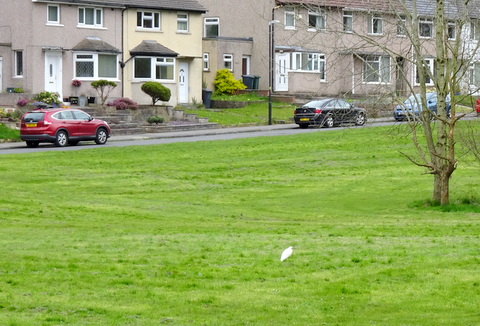 Cloudy and windy, not a choice day for the walk from Bowerham to Lancaster University via a mainly scenic route, it produced the surprise of a Little Egret looking set to become a garden bird candidate when this individual was on the green by Abbeystead Drive at Hala Carr yesterday afternoon. 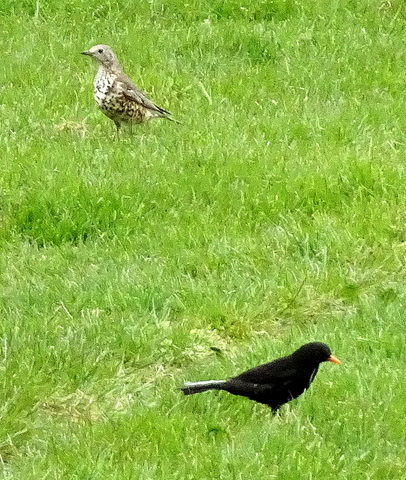 It was no small surprise to also find 2 Redwing in the area, late birds not having yet returned to their north European breeding grounds in mid-April, they were on a football pitch sized green space behind Moorside School. In the surrounding trees, a Willow Warbler, 2 Chiffchaff, 2 Song Thrush, a Mistle Thrush, Jay, and 2 Nuthatch, with Greenfinch heard.

At least 20 Blackbird seen on route to Lancaster University, with Rook seen and up to 30 nests in the rookery there.
Posted by Pete Woodruff at 10:52 1 comment:

I found a Common Sandpiper at Conder Green yesterday. Probably a returning bird, but the interesting thing about the sighting, the bird was found at the same location where I saw the wintering bird on eight visits out of ten to Conder Green, predictably on the bank to the left of the red boat. 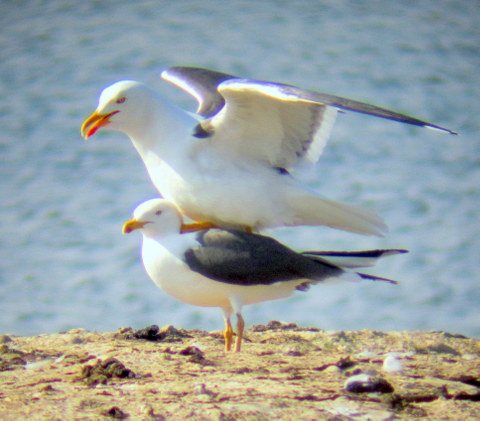 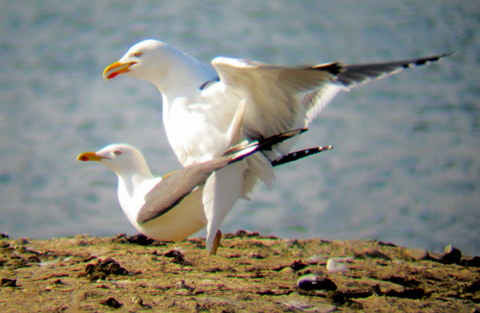 If the behaviour of these two is anything to go by, it looks like Conder Pool might have a breeding pair at last. These/a pair arrive and loaf around here annually, but never go on to nest, though they gave the impression they might do, but certainly did yesterday. There was an absolute nil regarding anything new and not much old on Conder Pool, but 3 Black-tailed Godwit noted in the creeks.

On the Lune Estuary, in a mixed flock of roosting birds similar to Monday, c,100 Black-tailed Godwit, and c.60 Bar-Tailed Godwit. At Cockersand, 520 Golden Plover in the field behind Lighthouse Cottage, 3 White Wagtail in field behind Bank House Cottage, a Stock Dove and Kestrel seen. 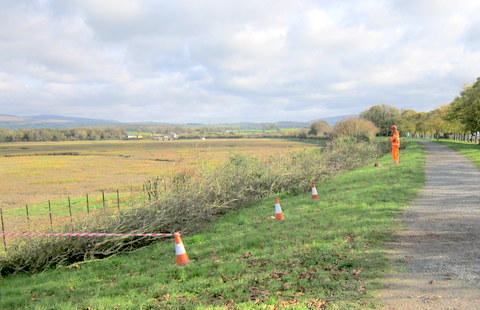 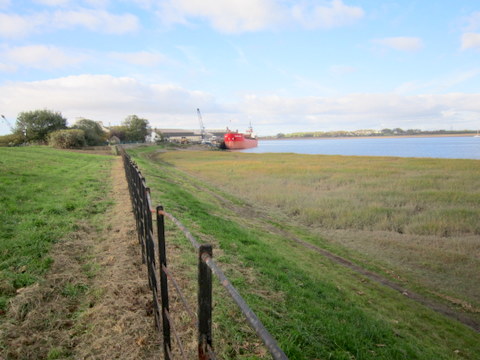 I took the top photograph of work in progress at Glasson Dock on 30 October, and below what the scene looks like behind at job done. Yesterday I discovered the destruction has continued along the coastal path towards Conder Green, the white speck is the long time yacht stranded on the marsh, a distance of something like a mile, with trees, bushes, wild flowers, and grasses all devastated as habitat for birds, and excellent for a number of butterfly species....Gone!
Posted by Pete Woodruff at 16:40 3 comments:

On my second visit this month, the Lune Estuary has yet to show me any signs of migration, with the exception of one or two sightings, I've seen just three Sand Martin, a Chiffchaff, and two Avocet on Conder Pool. 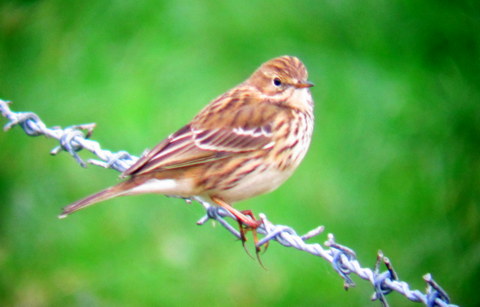 On Conder Pool yesterday, a single Meadow Pipit, a Goosander, and 2 Pink-footed Geese, I had seen three here 27 March. A Greenshank was down the channel from the iron bridge. On the Lune Estuary, up to 100 Black-tailed Godwit, and 60 Bar-tailed Godwit were my only notes here, and a Chiffchaff was at Christ Church.

At Cockersand, 52 Ringed Plover, and 15 Dunlin on Plover Scar, at least 520 Golden Plover were in the Abbey Farm fields. Otherwise, a Stock Dove was with Wood Pigeons, the local Kestrel seen, a pair of Shoveler were notable on the large ditch through the field at the junction of Moss/Slack Lane, and 2 Sand Martin flew north over fields as I drove away from Cockersand.

The ever singing Skylark was in my ears the entire visit. Pump up the volume for a taste of summer....

I saw at least 10 Small Tortoiseshell and 2 Peacock on the day.
Posted by Pete Woodruff at 15:43 3 comments:

Apart from a few Occupational Therapy style outings pretending to be birding, I was out yesterday to be a little more serious for the first time since my Birk Bank visit on 31 August 2018. 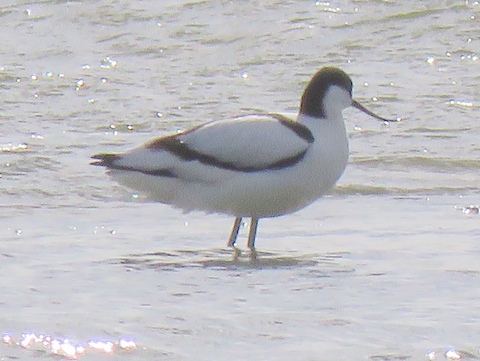 It was good to find 2 Avocet on Conder Pool, also 3 Shoveler drake at best a scarce sighting on here, 3 Black-tailed Godwit, and 13 Greylag. Although I've never accurately noted April numbers in previous years, 36 Oystercatcher seemed a good count yesterday, and certainly will be if the intention is breeding on Conder Pool this year.

The Lune Estuary at Glasson Dock looked very early summer in bird numbers, though up to 2,000 gulls seen, waders were all but non-existent save 32 Black-tailed Godwit and a 'few' Redshank and Wigeon hanging on. Cockersand had the same early summer feel, livened up by a Peregrine Falcon having put to flight c.400 Golden Plover, seen later more settled on the shore off the headland. Six Tree Sparrow were around Bank Houses, and I could hear a Skylark singing most of the time I spent at Cockersand.

A count of 82 Whooper Swan at Clarkson's Farm accompanied by 2 Black Swan, was all that was left of a record peak count of 620 at Cockersand on 3 February (Ian Hartley).

Of note, the Spotted Redshank failed to return to winter on the Lune Estuary/Conder Green, nor did the Common Sandpiper, last seen at Conder Green 10 October 2018. Other negatives, I failed to see my first hirundine, Wheatear, or any other summer migrants today.

Thanks to Ian Pinkerton for his image of the Avocet on Conder Pool.

I'd advise not to hold breath for the next blog post....My birding may never be the same intensity as before.
Posted by Pete Woodruff at 15:13 3 comments: 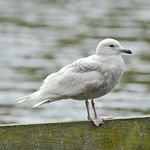