To be honest this year has ended as a crap one for me. I've not had a days birding since my last one on 14 October and I won't get out - with the exception of at least a couple of 'escape days' which I'm looking forward to but are a long time coming - for several weeks yet....trust me I know what I'm talking about.

However, a bird like the Kentish Plover at Cockersands on Tuesday 3 May isn't likely to ever be forgotten and I'll need to do a search to nudge my memory on all the other birds found/seen in 2011 of which there are several, American Golden Plover and Lesser Yellowlegs have already sprung to mind. So all in all 2011 was about as opposite to 'crap' as is possible to be and good birding days were as endless as any other year for me.
So to add a bit of colour and interest to the blog on the last day of this year 2011, I'd like to take this opportunity to share and showcase six photographs which have blown my socks off and hopefully will yours. They have been randomly chosen by yours truly and in no way are to be seen as a selective bunch to be set apart from the many excellent/brilliant/amazing pics I find on other birders/photographers websites, all good friends of mine many of whom I have personally met and some I've had many an hours first rate birding with at equally first rate locations and all of who have given me the necessary permission to post their images on Birdsblog.

Cuckoo.
Actually - with the exception of the last photograph - they are in bird name alphabetical order, and all resist the temptation to repeatedly use words like stunning/brilliant/excellent/amazing. The picture of the Cuckoo is by Paul Foster who did well to capture this bird on the wing, not all that easy to find these days let alone achieve an image as good as this.

Herring Gull.
The Herring Gull doing what it does best which is to 'down' large sizes of food source in one gulp - and shown to good effect - by David Cookson ....impressive stuff by DC.

Little Owl.
The Little Owl giving its usual 'oh no not him again pointing his camera at me'. A nice one of this appropriately named bird by Brian Rafferty

Meerkats.
And finally....the 'non bird' image of the Meerkats is from Gary Jones a very cool pic indeed.

Common Sandpiper. David Cookson.
I see with interest the/a Common Sandpiper has been reported a couple of times recently at Conder Green again, if this is 'the' wintering bird then its been hiding from all comers for several weeks now.

If you're looking to while away some time you could do much worse than visit any one of the above to view some excellent photography, read some interesting accounts of birding days, and much more. Meanwhile....A HAPPY NEW YEAR and GOOD BIRDING and many thanks for 'sticking' with Birds2blog to see if and when it comes back to life. I'm still getting new first time visitors, like the average of 14 over the last 30 days including 20 yesterday....who'd a thunk it!
Posted by Pete Woodruff at 14:48 9 comments:

By way of a change from the birds, I've been looking back on 2011 with regard to butterflies and have discovered how the hot dry spring and the warmest autumn on record had many species appearing much earlier and much later than in a typical year with some on the wing from early March to December.

Lulworth Skipper. Copyright Steven Cheshire.
....and the Lulworth Skipper - which is restricted to the south in Dorset - was also seen on the wing several weeks earlier than is usual, as was the Pearl-bordered Fritillary.

Grizzled Skipper. Copyright Steven Cheshire.
And my personal favourite of the three is the Grizzled Skipper - a little beauty - also emerged weeks ahead of the normal date in the warm spring weather. Red Admirals were still being recorded on the wing in the mid-December run-up to Christmas, and a rare Marsh Fritillary was seen in mid-September almost two months after the butterfly should have disappeared for the year.
The warm autumn weather also saw a large influx of migrant moths from Southern Europe with species such as the Crimson Speckled and the Vestal being seen into October. Other moths - including one with the bizarre name for December of Spring Usher - have been recorded regularly since November, months earlier than you would expect to have them appear, and the Humming-bird Hawk Moth is thought to have had its best ever year in the UK with in excess of 9,000 records submitted beating the previous one of 6,500 in 2006....intriguing stuff!

Painted Lady. Copyright Steven Cheshire.﻿
On a personal note void of a records search I rate my self lucky to recall finding one Painted Lady this summer on 7 July at Cockersands and don't remember seeing more than a couple of records from other observers in our area in the entire year. Thanks to Steven Cheshire for four excellent butterfly images.

Well....I still can't get to see these views of Conder Green. These were taken at high tide one day during the freeze of last year as seen from the viewing platform at Conder Pool, a couple of photo efforts by yours truly. But don't worry, I know all about the influx of large numbers of White-Fronted Geese into the UK and a good many more Bean Geese than is the norm, and the comings and goings of all the rare and scarce birds both nationally and locally like the....

Glossy Ibis. Colin Bushell
Glossy Ibis at Leighton Moss above - thanks for the image CB, much appreciated - and the Glaucous Gull, Snow Geese, Snow Buntings, Shore Larks, and Great White Egret to mention but a few.

Greater Yellowlegs. Gary Jenkinson
And the Greater Yellowlegs which GJ saw in Northhumberland last month is almost certainly the very same bird now present in the Highlands of Scotland, its wintering grounds being in the southern coastal areas of the USA. It's interesting that given both the Lesser Yellowlegs and Greater Yellowlegs  are long distance migrants the number of records in the UK are something in the order of up to 300 of the LY yet little more than c.30 of the GY. Incidentally, the first record for the Greater Yellowlegs in Britain was of a bird at Tresco on the Isles of Scilly in September 1906, and the Lesser Yellowlegs 52 years earlier in Nottinghamshire in 1854. Thanks for the image Gary, much appreciated.
Thanks for the comments in 'At it again!' they are much appreciated, and....I'd like to wish everyone who supports/visits Birds2blog and reads this post despite the continuing attempts to keep it afloat until normal service is resumed....A VERY HAPPY CHRISTMAS and many hours of excellent birding in 2012....I'm sure I will....eventually!
And finally....I'd like to pass on another Christmas Wish sent to me by one of my ardent supporters and good friend who - like so many others - obviously knows me well....

Updating that is....to keep the blog breathing, with only a little advance in the change of circumstances which - as you will already know if you follow Birds2blog - has brought my birding life to a grinding halt for the time being and also reduced the blog to a skeleton.

If your in the camp that gets fed up of hearing me going on about 'shooting birds for fun' or 'slaughtering them as pests' then perhaps you'd better move on. If you're staying there's some brilliant photographs and a little info on some of the birds which have recently advanced my passion for them a little further.
The Blue-winged Teal breeds over much of North America and being a long distance migrant and 'summer duck' is very much the equivalent of the Garganey. The pattern of appearances in the British Isles is complicated by escapes, but a ringing recovery from New Brunswick in 1971 in Suffolk proved conclusive  that there are genuine vagrants, this individual was ringed as a juvenile in Canada. But there's a sting in the tail of this little piece about the species in that I recently read someone had cause to make the comment that it was a worry when people with guns can't identify birds. Sadly it looks like someone in Ireland lived up to this worry when a Blue-winged Teal was shot on 10 November at Upper Lough Erne in Co Fermanagh.
I throw my chances of the popular vote to the wind as I have no desire to gain popularity when it comes to the shooting fraternity, therefore I'm always ready to oppose and 'shout my mouth off' about those who shoot birds for fun, but this time I'll resist the temptation to launch into a vitriolic attack on them. Incidentally, there's a petition regarding the fight against raptor persecution and those who slaughter them as pests which I was going to put on Birds2blog but find it's on other blogs and websites for you to sign. There's a link to the petition and a small taste of discussion on the subject HERE
On a lighter note there's a nice little video of the Blue-winged Teal HERE
Of course any post on Birds2blog wouldn't be complete without at least one or two excellent photographs so try these.... 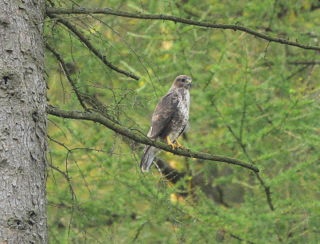 Buzzard. Gary Jones
The Buzzard was taken on one of Gary's many visits to the Lakes where he does some of his mountaineering and where others fear to tread judging by the dramatic photography he achieves whilst up there....visit his website and see for yourself....there's a good example of his latest 'adventure' in Wales HERE
﻿ 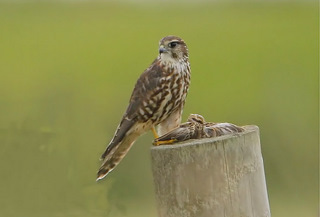 Merlin. Paul Foster
My most favourite bird of prey the Merlin, taken by Paul on a Hebrides adventure he had earlier this year....please take a look at his blog. 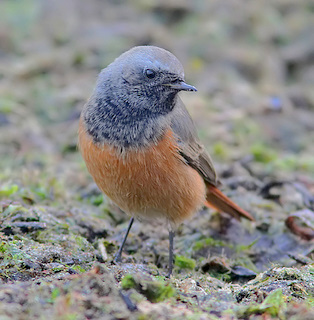 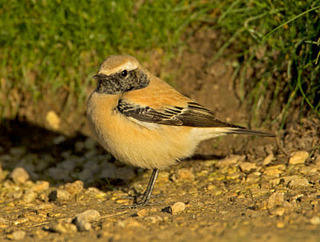 Desert Wheatear. Mike Watson
Here's another 'goodie'﻿ to have turned up in the country this autumn, the smart little male Desert Wheatear seen and photographed by Mike on his visit to Bempton Cliffs on Yorkshires east coast in November. Interesting that the species was once classed as a member of the Thrush family but is now more generally considered to be an Old World Flycatcher. The first Lancashire record of the species was of one found 20 years ago at Rossall Point, Fleetwood in November 1991. The first for Britain was 111 years earlier at Alloa, Clackmannanshire, Scotland in November 1880. There was an interesting Desert Wheatear trapped at Landguard, Suffolk, in October 1987 which subsequently moved overnight c.270 miles south-west to Devon. This bird clearly illustrated that what might appear to be unrelated vagrants may involve the same birds moving around the country and appears to confirm the suspicion that autumn vagrants arriving on the east coast tend to filter south-westwards. It is also an indication of the kind of distances many migrants may fly in one night. 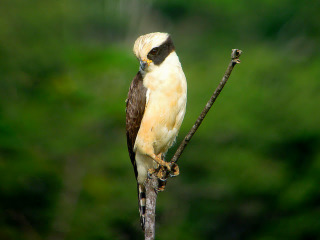 Laughing Falcon. Colin Bushell
And another little beauty, this one seen by Colin on his visit to Colombia. The Laughing Falcon is also called the Snake Hawk, erroneously since its not a hawk at all, though it is a specialist snake eater.
The video's good....though you do need your speakers plugged in to get the full effect and hear the bird laughing.
Thanks to Garry, Mark, Paul, Mike, and Colin for these brilliant images, and many thanks to all those visitors to Birds2blog - old and new - who still look in despite the 'bare bones' about it at the moment....I really appreciate you. Also a special thanks to all those who took time to comment on 'Closing Down' and later on 'Delighted with my failure'....these were some welcome comments which I noted and much appreciated.

There's a lot going on in the birding world both here and afar but didn't want to 'overload' the post....perhaps later.

I'D SOONER BE REPORTING ON THE BIRDS I'VE ENCOUNTERED!
Posted by Pete Woodruff at 17:11 5 comments: