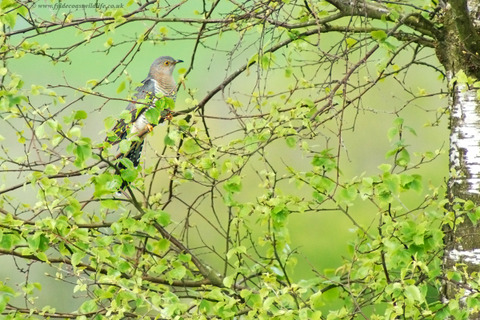 Another perfect day for a wander on the Bowland Fells which paid off nicely, not only because I heard my first Cuckoo from Harrisend, distant and sounding like it came from the Grisedale/Nicky Nook area.

It took me two hours to find the only male Stonechat seen, it was alarm calling with it's sharp whistle and throaty clicking, the female no doubt somewhere on the nest, 13 Meadow Pipit was two up on my last low count of eleven here on 8 May, 3 Linnet, 2 Willow Warbler, 2 Wren, a Mistle Thrush and Blackbird. A Kestrel with two tail feathers missing, and of 4 Buzzard seen, one over high had prey dangling from it's talons, which on size and shape looked suspiciously like a Stoat.

Of 5 Reed Bunting seen there was some odd behaviour by a male which scuttled through the heather, at one point I observed it moving along the ground with wings held up like a butterfly with closed wings. I have no understanding of this behaviour, and not seen anything like it before, I was beginning to think it was unable to fly, but it did eventually take to the wing.

Butterflies including several Large White were, 11 Small Heath and a Small Copper.

On Hawthornthwaite were I found no Stonechat, 11 Meadow Pipit, 2 Mistle Thrush, 2 Blackbird, and a lone Red Grouse was the only one seen on the two fells today, up to 10 Sand Martin were over and around Catshaw Greave, butterflies seen were 7 Small Heath.

I gave 20 minutes at Stoops Bridge, Abbeystead, to find 2 Garden Warbler and a Spotted Flycatcher, and finished the day to see 8 House Martin with four active nests at Christ Church, 2 Buzzard soaring together overhead.

Thanks to Bob and to Cliff for their images, they are much appreciated.
Posted by Pete Woodruff at 10:55