Whinging Through The Lockdown....

I've sort of enjoyed the self-isolation thing up to now, including recording the garden birds and butterflies, and finding the Carrion Crow having taken up residency in the area of our neighbourhood for the past few weeks - all a bit odd - and visiting our garden regularly for the odd slice of bread thrown out by KT, for who feeding the birds is a religion.

I'm also enjoying seeing the reports - though sickened by them for obvious reasons - of summer visitors to our area. I've seen good numbers of Wheatear reports, also Whinchat in decent number which is encouraging, and the warblers seem well represented too. 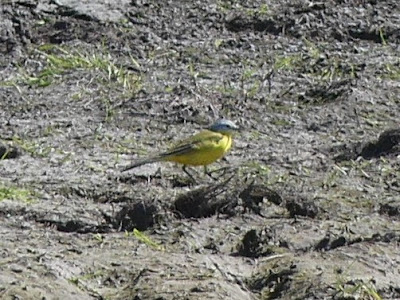 Over the past few days I've been impressed by the reports from Aldcliffe which have included a smart hybrid Blue-headed Wagtail on the flood, found and photographed by DH for whom I'm grateful to for sending me a copy of his record shot. Also here, a peak count of 5 Little Ringed Plover, a few Yellow Wagtail, and good numbers of White Wagtail.

I've been equally impressed by coverage of the passage through Heysham which is in full swing, the count yesterday when I Iast looked at Heysham Obs was of 1,447 Arctic Tern past Heysham, with many going overland to the NE within the observers view....Great stuff.

Not so much garden birding, but more computer birding me thinks, and I'm not convinced this personal enjoyment of self isolation and no birding can last. One thing for sure, the enjoyment will deteriorate as time goes on, and I'll develop an unbearable itch for freedom birding.

Meanwhile, the motto of the day is....Take Care Keep Safe.
Posted by Pete Woodruff at 13:34

You have my total sympathy, Pete. I'm nothing like the avid birder that you are, but I'm suffering from the frustration of diminishing numbers of birds visiting the garden partially due, I hope, to natural food being available to them in the wild, but also, of course, due to the departure of overwintering birds. Now only getting around 14 species per day putting a foot down in the garden (I don't count fly-overs). Encouraged, however, by our first 2020-fledged bird visiting yesterday and with us all day - a Robin, which was full of attitude and alreadty had one red feather showing on the breast!