Following the - short on clarity - advice by the Right Honorable Boris Johnson, to be able to go out in your car to wherever and whenever you wish whilst maintaining social distancing, the therapeutic value of a visit to Bowland for me was huge. I had a wander from Marshaw to Tower Lodge, on to Trough Bridge and towards Winfold Fell, then on to 'another good idea' at Hawthornthwaite Fell.

I heard 5 Cuckoo on the day and saw none, all separated by distance and time, and noted all as individuals. Three were heard over four hours, one at Marshaw, one above the plantation at Tower Lodge, and one in the area of Winfold Fell. Later in the day, one on the west side of Hawthornthwaite, and one heard from Stoops Bridge at Abbeystead.

Of 28 species noted, about the average for me at this location for four hours, I found 3 Spotted Flycatcher, a disappointing number considering I regard this location as traditionally the best for the species in our area previously seeing up to twelve on one visit. Also 3 Common Sandpiper seen, and 15 Grey Wagtail along the length of the Marshaw Wyre included young being fed. 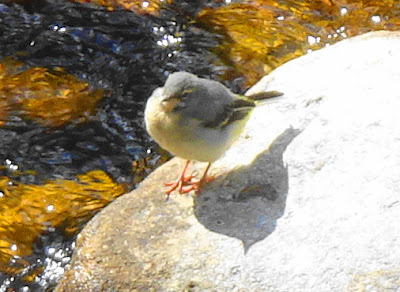 The annual House Martin colony was at Marshaw Farm, with a good number of Sand Martin opposite the farm on the Marshaw Wyre where a Dipper seen. At least 4 House Martin were visiting nests at Tower Lodge, 8 Mistle Thrush, a Song Thrush, 4 Coal Tit, 2 Blackcap, 2 Wren, a Treecreeper and Nuthatch, uncounted but up to 12 Willow Warbler, and a Roe Deer ran across the road up from Trough Bridge. A Red Grouse was seen from the track to Winfold Fell.

I came across a first for me on Hawthornthwaite. Having only a handful of previous records to my credit for the species, I had no idea what I was hearing calling distantly in the treetop to the right of the track below the fell top centre of the pik above, and thought this was going to be the one that got away as I got closer, until I saw the bird atop of some dead branches on a tree ahead of me, it was a stunning male Ring Ouzel. I have previously found Ring Ouzel three times on this fell, including a stunning male on 20 April 2016, and two seen distant flying away from me 18 April 2018.

Oh, how I'd love to see a Ring Ouzel again, Pete! Not much chance this year for me, I'm afraid - fingers are crossed for 2021. Didn't recognise that header shot at first - took me a while to work out when and where it was.