Two hours on Friday at Conder Green/Glasson Dock, and another two at Heysham Red Nab, was mainly dominated by gulls. At Glasson Dock, I spoke to a birder from Gloucestershire and made the comment, looking without optics, you would get the impression that the Lune Estuary from this viewpoint was void of any birdlife, an area where thousands of waders can be seen in the winter months.

Well it wasn't exactly crawling today, and what birds were present were mainly camouflaged by the weed covered stones they were on at low tide, but by the time this birder came to talk to me, I had found 4 Mediterranean Gull in a group, distant and hunkered down on the weedy stones, all black hooded with 2 Black-headed Gull. Eventually two took to the wing to reveal both adult, the other two remained resting and were both 2nd summer/adult. I couldn't help but wonder if these were the same Saltcote Brow  four I'd seen on 10 July, a single Black-tailed Godwit was the only other note I made.

The Common Tern family of five were present on Conder Pool, with a bump up in the number of 5 Little Grebe, these are early returning birds to Conder Pool this year, the first I saw here in 2016 were two on 25 July. In the creeks and channel,15 Common Sandpiper seen, and Greenshank calling in flight towards the estuary.

It's as well there was a decent gull roost on Red Nab at Heysham, as the outfalls held only c.150 Black-headed Gull at Stage 1, and 25 at Stage 2. I found 9 Mediterranean Gull, seen as 6 adult, two 2nd summer, and a 1st summer. These birds were found on my first visit to Red Nab three hours before high tide, on my second visit an hour before high tide, from a distance I saw the mutt brigade clearing out the gulls save maybe fifty left by the time I got there, one of which was a remaining adult Mediterranean Gull with a few Black-headed Gull.

Thanks to Peter Rhind for the excellent header image. His juvenile Wheatear had already found its way to Cockers Dyke on the Fylde coast on 11 July. The Wheatear has a prolonged autumn migration period, and can be seen until November in some years, the latest Lancashire record being 17 November 2011. 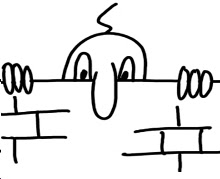 Beautiful landscape. I love.. Have a nice week.. Cheers..

Was this a dark haired lady with a significant gang of dogs? I'll have a word as they were out there again yesterday but fortunately the tide was out (commercial dog walking company)