I managed to carry out my plan to get to Heysham a couple of hours before high tide yesterday, in fact I got there three hours before, which went against the degree I have in usually getting the timing wrong.

There was an eventual total of 14 Mediterranean Gull on Red Nab at 4.00pm, an hour before high tide, they were seen as, 9 x adult, 4 x 2cy, and 1 x 3cy, one bird was marked with a white darvic ring, unreadable unfortunately. 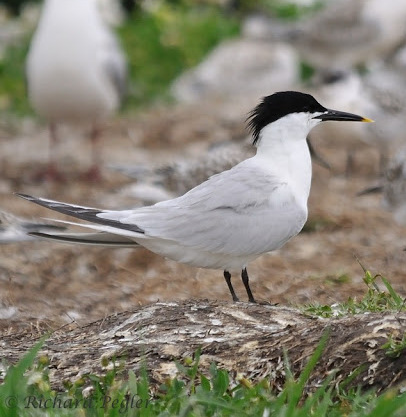 Earlier I had found a lone Sandwich Tern on the shore by No 1 outfall accompanied by Black-headed Gull, of which there was up to 250 around the outfall.

As I stepped on to the viewing platform, what I'd have preferred not to have seen was a Carrion Crow flying off with a Mallard chick in it's bill and the female running in pursuit.

Conder Pool appears to have 2 Avocet adult, and the lone grown young bird which seems to have spent most of it's life so far in the long grass. The 3 Common Tern young are surviving and thriving, these three and the young Avocet will all hopefully have fledged by this time next week. Also noted on the pool, c.30 Redshank in view, with more out of sight I reckon, up to 50 Lapwing, and 2 House Martin over the pool. Scattered around the creeks was 8 Common Sandpiper, and a movement of at least 50 Swift were also in the area and as far as the eye could see beyond Jeremy Lane. 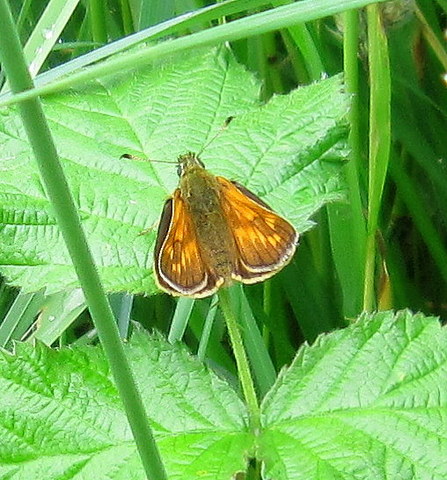 A Large Skipper by Conder Pool was the only butterfly seen, no surprise given the weather.

Many thanks to Richard for his excellent image of the Sandwich Tern.
Posted by Pete Woodruff at 12:38