On Fridays visit to Conder Green, the Greenshank of late - with a peak count of 14 on 19 August - had deserted Conder Pool, but 11 Little Grebe remained, with 8 Teal back on here, and up to 160 Lapwing seen. In the creeks, 3 Common Sandpiper and a Goosander, and at River Winds, House Martins showing interest in a nest where a bird could be seen inside.

Seen from the coastal path, a Sparrowhawk flew over and out on to the marsh, no doubt the culprit being the cause of everything on Conder Pool in the air a few minutes earlier. On the Lune Estuary, an adult Common Tern, a 2nd winter Mediterranean Gull, and 3 Greenshank, 4 Painted Lady were on Knapweed by the bowling green.

The plan was then to go to Heysham were I counted 28 Mediterranean Gull on Red Nab an hour before high tide. I reckon a few would have been missed, not easy to see, with some birds hunkered down, hidden amongst the rocks, and not close in on what was a 7.80m tide an hour after I left.

On the pond, a particularly stunning male Emperor Dragonfly and Common Darter, with 6 Painted Lady on Buddleia, a Peacock and Gatekeeper seen.

The header image taken on Conder Pool, is dedicated to the memory of Ian Pinkerton, whose funeral I attended at the Parish Church of All Saints at Wigan on Wednesday. The image is a classic of Ian's showing the adult and young Common Tern expressing disapproval of the sheep being on their territory. 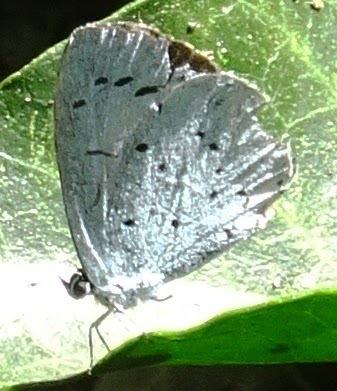 It was nice to find a Holly Blue yesterday, not the best image of one, too much sunlight on the scene, and has wear showing in it's wings....But a nice Holly Blue in our garden all the same.
Posted by Pete Woodruff at 11:36