Nothing Ventured Nothing Gained.

On my latest visit to the Lune Estuary, 11 Greenshank remain faithful to Conder Pool, with 11 Little Grebe steady since the first week in August. Also, 3 Common Sandpiper on the pool, with 2 Stock Dove, and up to 160 Lapwing. Just as I was about to leave, an impressive at least 40 Swift were seen in a wide sweep of the skies above Conder Pool, the most Swift I ever saw in one sighting. 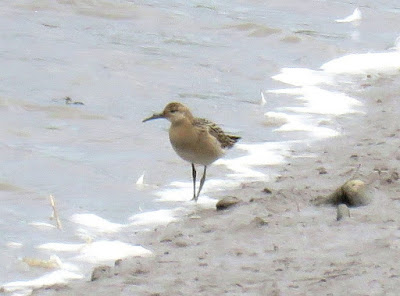 On the Lune Estuary, a Ruff was with barely a three figure of Redshank feeding close in, 6 Goosander were also noted. Over the canal basin, c.50 Sand Martin hawking, and on the canal by Christ Church, a Brown Hawker.

Butterflies seen in my time around the Lune Estuary, 90 Painted Lady (405), 11 Common Blue, 6 Small Tortoiseshell, and a Speckled Wood.

I'm grateful to Stephen Dutton for sending me the image of a Ruff in the creeks at Conder Green last weekend. I also made a video of the Ruff on Conder Pool, though not very successful as it was made looking into the sun, rendering the Ruff and three Redshank a semi silhouette.

I'm amazed by the depth of zoom you've got on that video. It's strange, but I felt myself feeling slightly sea-sick when viewing the zoomed footage - and I don't usually have a problem with sea-sickness! Best wishes - - - Richard

For the benefit of those seeing these comments, I dumped the 'hijacker' and make no other comment on the issue....It's best that way.

Hope you got over the sea-sickness Richard!