At Conder Green, 9 Little Grebe seen as six in the creeks and three on Conder Pool were there was 14 Wigeon and little else. On the coastal path 6 Chaffinch were of note.

There was good numbers of Fieldfare in the berry laden hedges along Moss Lane to Cockersand, including at least fifty along the length of one close to Bank Houses....Clik the pik it's a bit more 'berry laden' impressive.

Up to 200 Whooper Swan remain in inland fields despite much farming/tractor activities in the area. Also in fields, 268 Black-tailed Godwit, 125 Curlew, and at Cockerham Sands, a Rock Pipit, 10 Greenfinch, and 2 Reed Bunting.

On Plover Scar at high tide, 55 Turnstone, 25 Knot, and 12 Oystercatcher. From Slack Lane, at least 50 Meadow Pipit were flighty, and on the wires appeared unaffected by a Kestrel perched alongside them at one point.

There had been no sign of the Stonechats seen at Cockerham Sands on 21 November, and again from Slack Lane on the bulrushes 26 November, I had checked both locations and all points in between. But a hunch they might be along the sea-wall between Lighthouse and Crook Cottages paid off handsomely when I found the pair in fading light at dusk, they were midway between the two cottages....Third time lucky. 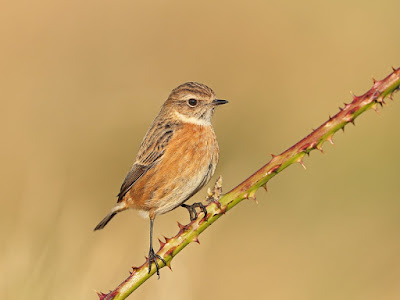 My birding had ended as well as it could have done, after all these were a pair of Stonechat, with no apologies for yet another pik.
Posted by Pete Woodruff at 10:59

Definitely no apologies required for another Stonechat Pete!