The page was almost filled in the little black book yesterday.

Starting with calling at Conder Green about 30 minutes before the high tide, when a smart adult Mediterranean Gull dropped in with the Black-headed Gulls to make a decent start to the session, and at least 150 Teal. On Conder Pool, 3 Little Grebe, 25 Curlew, 18 Wigeon, with 2 Snipe over and a hovering Kestrel.

On the canal basin, a drake Pochard, 2 drake Goldeneye, 38 Tufted Duck, 2 Goosander, and a Great-crested Grebe. Of note on the Lune Estuary, c.350 Dunlin, and low counts of 45 Golden Plover, 34 Black-tailed Godwit, and 32 Curlew, 2 Little Grebe were on the River Lune today at the Conder mouth.

Driving along Moss Lane to Cockersand, several groups totaling an estimate of 200 Fieldfare. Four Rock Pipit were off the marsh at Cockerham Sands, also 6 Snipe, and 18 Turnstone were again on the shingle here, and a lone Grey Plover on the shore. At Bank Houses, 9 Greenfinch, and a Wren. In fields, c.225 Curlew and 28 Black-tailed Godwit. 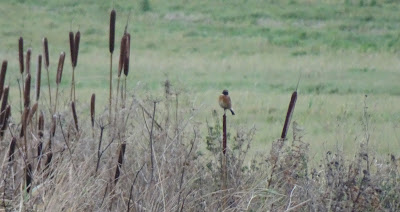 By a stroke of fortune along Slack Lane, a bird seen flying across the field behind Lighthouse Cottage, and then on the bulrushes along the ditch between fields, was a male Stonechat, soon joined by a female, they were almost certainly last Thursdays pair less than a mile south from here at Cockerham Sands.

The pik is as good as it gets with my little digi camera. Not world class equipment, and the bird was a long way off using the zoom lens. Clik the pik, it really is essential this time to see the bigger picture.

The session ended even better than it had started with the Mediterranean Gull. Well....after all they were Stonechats!

It was good to see a drake Pochard on the canal basin yesterday at Glasson Dock, one seen at Middleton NR on Sunday was referred to as 'presumably the Lune Estuary singleton?'.

The Pochard is at best a scarce bird anywhere on the Lune Estuary, referred to as 'very irregular' in the LDBWS Annual Report. My last record was a drake on Conder Pool 21 June, previously, three drake was an exceptional record also on Conder Pool 31 May 2018. 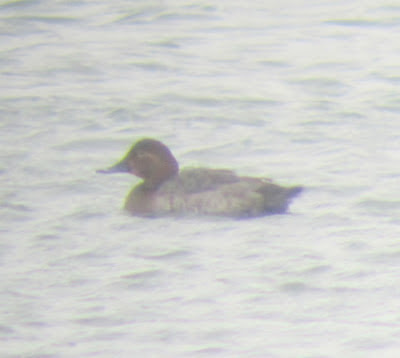 A female photographed through the fog on Conder Pool 15 March 2018, has an even more scarce status than the drake.
Posted by Pete Woodruff at 12:44

Ohhh!! Lovely Stonechat... Many thanks for your comment.. Have a great weekend ahead..

Not much lifts the spirits like a Stonechat does, Pete! Best wishes - - - Richard