At 10.30am on 19 November 1994, I was looking through some waders on the groyne at Teal Bay, when I came across an odd one out amongst 50 Ringed Plover. I instantly noticed it had long black legs, and void of taking more notes of some subtle differences between sexes, I referred to the bird as a female Kentish Plover. But by late summer a male would have attained female-like plumage, so my claim of a female was actually somewhat dubious and shouldn't have been made. 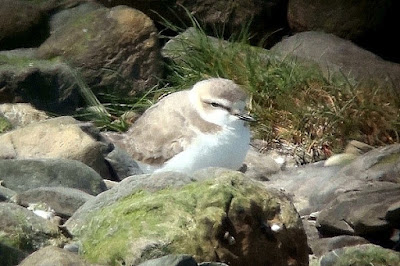 Bearing in mind these were the days before the mobile phone was common place - and I certainly didn't have one - I remember driving to Heysham to deliver the alert about the discovery, and the drive back to Teal Bay to find the bird had departed, no doubt the result of disturbance by a wind-surfer active in the area. I appreciated the note in the LDBWS Annual Report which read....'Thanks to PW for driving to Heysham to inform me (PJM), pity about the wind-surfer!'

But the record of this Kentish Plover takes on an even more interesting note, when it was thought to have been the very same individual to have arrived back at Rossall Point, Fleetwood a couple of hours after leaving Teal Bay. This Kentish Plover had first appeared at Rossall Point on 8 March 1992 and returned there each winter for 6 years, until it was last seen on 9 March 1997.

Today, the Kentish Plover is an annual migrant to Britain in small numbers, about 40 birds on average are reported, but few of these are on the west coast.

The first record goes back to 1787 at Sandwich in Kent, when a keen observer of natural history sent a specimen he had shot, to a Dr Latham who found it to be an unknown species, and subsequently named it a Kentish Plover.
Posted by Pete Woodruff at 10:49