The Bullfinch Has It.

Whilst some decent weather lasted, on Thursday I decided on the walk from Aldcliffe to Glasson Dock to note 33 species including, walking by Freeman's Wood I found 5 Goldcrest, a Treecreeper, and a Jay. At Freeman's Pools, 6 Goldeneye were my first this winter with a few Gadwall seen. In the Frog Pond field, a mix of up to 900 Greylag and Canada Geese were at around 60/40%. The only bird of note on the Wildfolwer's Pools was a drake Shoveler.

In the Stodday area, a pair of Bullfinch in the cutting was excellent, also a Song Thrush, and 7 Little Egret together on the marsh. Along the way, 12 Blackbird, 6 Long-tailed Tit, Greenfinch, Coal Tit, and Wren. On the canal basin, 11 Tufted Duck were all female, and at least 50 House Sparrow were around the bowling green bushes. 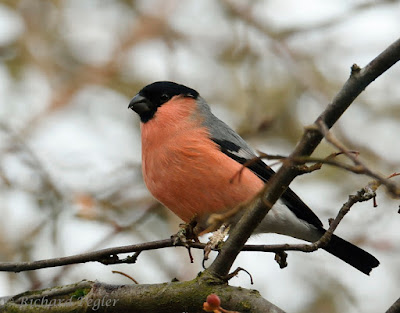 Thursdays Bullfinch sighting was the best of the walk. Having only occasionally visited traditional sights in south-east Cumbria, Arnside and Silverdale, I've only ever made 15 records over 10 years, none of which were in Bowland. I think the surprise of these was 5 seen in Lancaster Cemetery on 30 October 2014, but 10 years earlier was the best of my records, when I found 4 Bullfinch at Birk Bank on 1 November 2004, this was followed by 4 here again on 22 November, then almost a month later I found 8 Bullfinch here on 18 December.


These are the only records of Bullfinch in Bowland in our recording area that I am aware of, but it is interesting to note that 2004 was the year of an invasion of continental Bullfinch into northern Britain around mid-October, when exceptional numbers were reported mainly in Scotland and along the east coast of England. No coincidence then, that these records of Bullfinch in Bowland occurred around this date in 2004, and that the distinctive 'toy horn' call of the Northern Bullfinch was noted in my records.

Thanks for the much appreciated Bullfinch Richard.
Posted by Pete Woodruff at 10:39

I am truly surprised that Bullfinch isn't relatively common in your neck of the woods, Pete. We were doing quite well with them in the garden this year, but have not now seen an adult for a couple of months and it's a few weeks since the juveniles left too. I miss them!

Thank you for using my pic. My best wishes - - - Richard