Birding started a little sluggish on Thursday. I found just 2 Little Grebe at Conder Green with 38 Wigeon, and 9 Goosander on Conder Pool. The Lune Estuary at Glasson was dull and dreary bird-wise, though in excess of 1,000 gulls is a bit of a contradiction to that, but c.120 Black-tailed Godwit were the only waders of any note. 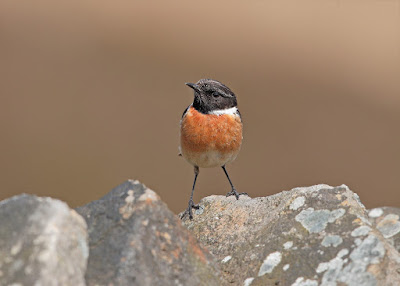 But things bucked up at Cockersand, if only because the persistence of three previous visits with one bird in mind paid off today. In a quote from my post on 17 November....'I was also hoping to find a winter Stonechat here, they usually are'....Just as I had hoped for, and had expected to be honest, I found 2 Stonechat, a male and female in the area of marsh in front of the Caravan Park, just the one initially, but eventually two birds.

Ten Black-tailed Godwit were feeding close in on the shore, and 6 Turnstone were doing just that on the shingle here again, also 4 Greenfinch seen. Up to 40 Fieldfare were dropping into a field as I drove past Gardner's Farm on Moss Lane.

Earlier in the week I had seen a Goldeneye on the River Lune upstream from Skerton Bridge, and saw a Jay and Long-tailed Tits in the wooded area here. I then walked along St Georges quay, and on to pay a visit to Aldcliffe, where I saw at least 90 Fieldfare in the hedgerow, and had good numbers of Redwing and Greenfinch, both making it hard to get a grip on numbers being on the blind side of the hedge running parallel with the flood, but certainly a decent double figure of the thrushes.

On the Wildfowlers Pool, 4 Goldeneye, 6 Shoveler, and c.130 Teal were to note, and on the canal walking back to Lancaster, a pair of Goosander seen.

In the header image, Cockersand was as good as it gets on Monday last. It was pure magic to be on the headland and look over the flat calm sea.
Posted by Pete Woodruff at 10:39

I love your header image, Pete. I also managed to connect with Stonechats recently and always think of you when I do! Best wishes - - - Richard