Notes From The Lune Estuary.

The peak count of 22 Little Grebe on Conder Pool this year was on Sunday 6 October (Ian Hartley). Since then the number on the pool begins to fall each year by mid-October, and the grebes are to be found in the creeks and have even been seen at times on the Lune Estuary.

On Friday I found 10 Little Grebe, five of which were in the creeks, and included two downstream towards the Conder mouth, the other five were seen on Conder Pool with 2 Goosander noted.

At and around Christ Church, at least 12 Long-tailed Tit seen, with a Grey Wagtail seeming out of context amongst the topmost branches of a tall Sycamore. A Great-crested Grebe was amongst a good number of Coot on the canal opposite the church. Noted on the Lune Estuary, with the exception of Lapwing, wader numbers were very low and unremarkable, a conservative estimate of 350 Common Gull, with an equal number of Black-headed Gull, 22 Black-tailed Godwit, c.120 Wigeon and 2 Goosander.

At Cockersand, Tuesdays 550 Curlew were seen as at least that number again today, but c.450 Golden Plover were less than half the number seen that day. Walking along the road, a Snipe came up out of a ditch, 180 Redshank were on/around the flood at the Moss/Slack Lane junction, and a Merlin allowed me to stalk quite close, perched on a fence post. 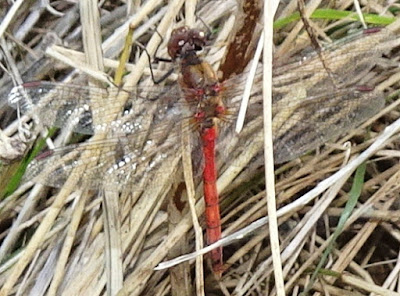 Although their flight period goes into November - rarely in December - it's always going to be a bit of a surprise to see a Common Darter on a cold day at Cockersand in that month.

Thanks once again to Howard for his excellent Little Grebe header image.
Posted by Pete Woodruff at 11:26

Great to know you've recently sighted Common Darter, Pete. I'm relatively sure I'll see no more dragons this season - it's got so cold in these parts lately.