I got a text yesterday morning to tell me of a Snow Bunting on Plover Scar, by something of a coincidence the very place I was heading for at the time. Thanks for the heads-up Ian, it was much appreciated as always, and the dip took nothing away from the appreciation.

Despite giving three hours to Cockersand, the Snow Bunting was nowhere to be seen, but I noted 325 Oystercatcher and a lone Ringed Plover on Plover Scar at high tide. At my back as I checked the scar, I found the field to the north of Abbey Farm was holding at least 2,500 Golden Plover, an impressive sight here again, also the number was more like 635 Curlew today, an increase of around 100 at my last two counts. There are always a few wildfowl around the ditch south of the abbey, today 32 Teal, and close by 25 Wigeon were grazing. Along the length of the headland, 12 Turnstone, with 6 Grey Plover seen on the wing. 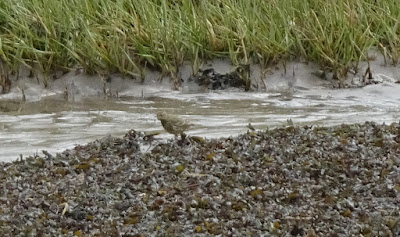 At Cockerham Sands, 5 Rock Pipit seen on the marsh and the shingle to the north of the Caravan Park. Off Moss Lane, 65 Whooper Swan were at Clarkson's Farm, and uncounted Fieldfare seen from a moving car included c.20 in a tree.

To note on the Lune Estuary, c.320 Black-tailed Godwit, also 82 Wigeon were all hauled out and on the mud. On the canal basin, 28 Tufted Duck and 5 Goosander. Ten Little Grebe at Conder Green were seen as the same pattern as last Friday, with five on Conder Pool, and five in the creeks including two downstream towards the Conder mouth.

A Common Sandpiper has wintered at Conder Green for 11 years now, but despite the traditional circuit search yesterday, there was no sign of the bird again for the fourth week. But this absence for long periods has happened before, in fact in its second year of wintering here, it wasn't seen after 22 November 2009, until it reappeared on 28 December, so I'm not prepared to give up on the Common Sandpiper at Conder Green just yet.

On a beautiful sunny and calm day, a pleasant wander over Heysham Barrows with KT saw a Song Thrush and up to 12 Long Tailed Tit in the woods, and a Rock Pipit on the shore at Half Moon Bay.
Posted by Pete Woodruff at 13:58

I do get a little jealous with your Whooper Swan numbers. I just want to see one at Reculver. That would do!