The Estuary & The Harbour.

The Lune Estuary, Heysham outfalls, and Red Nab yesterday to be precise.

Didn't really expect the first bird seen on the Lune Estuary to be an Avocet, a good example of 'what next' when yer birdin', it was sweeping side to side with 5 Greenshank and a Spotted Redshank close by, an adult Mediterranean Gull bore rings on it's left leg, I got the colours but no chance of reading any marks. At least 500 Golden Plover came down onto the weed covered stones mid-river at low tide, 27 Greylag and 14 Wigeon also noted.

I called in at Conder Green to check over Conder Pool and saw 13 Little Grebe in a single scan, and 6 Snipe. 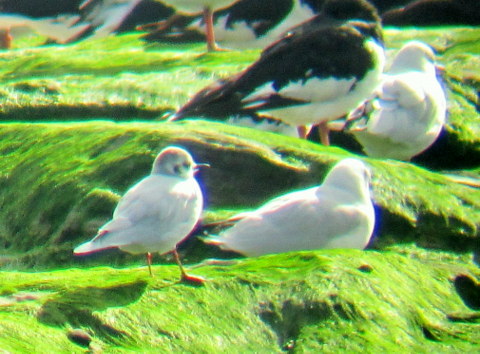 I was at Heysham 3 hours before high tide, checked Red Nab, went through the outfalls to the harbour and returned to Red Nab an hour before the high tide at around 4.00pm. I found three adult Mediterranean Gull on Red Nab both visits - 11 reported low tide Here - and an adult Little Gull obligingly came close on Red Nab as the tide rose, and I took note of 4 Wigeon here. 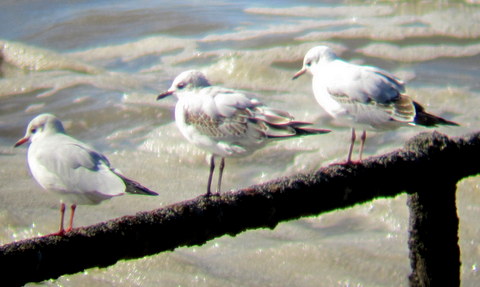 A 1st winter Mediterranean Gull was on the railings at Stage 2 outfall.

Thirty Goldfinch were seen twice on our garden feeders yesterday.
Posted by Pete Woodruff at 10:59

The Mid Gulls and Little Gulls are excellent photos Pete.

Not too sure about 'excellent' but kind of you to say so.

Good to see you back in business after your unfortunate accident Bob....Kind Regards.

I thought that we were having good number of goldfinch in our garden, Pete, but your 30 knocks spots off our totals. It must be an 'up north' thing as young Fin Wilde is getting high numbers too! :-)