The spring passage of in excess of 100 Stonechats appears to be going through the roof. I've noted records of 50 Stonechat on the FBC website in 2 weeks to date, almost certainly all passage birds with no duplication. AC was in touch to tell me his personal tally had reached 50 at close of play on Friday, with more seen since, including 5 this very morning at Fluke Hall. By comparison, my 9 Stonechat record for March is abysmal.

Whilst failing to find any Stonechat at Cockersand on Friday, 1,500 Golden Plover were in the field east of Abbey Farm. Four Snipe came off the marsh in as many minutes, and I wondered how many more would have been seen if I'd have hung around as the high 10m+ tide pushed them off. I also saw a lone Tree Sparrow around Bank Houses, the first for almost a year here when I saw six on 2 April 2019, also a Dunnock, and a Skylark in it's never ending flight song.

I watched up to 4,000 Pink-footed Geese from Cockerham Sands CP, every one of 'em calling 'yak-ak-ak' over and eventually settling on Cockerham Marsh. On the Lune Estuary at Glasson Dock, just prior to being pushed off by the tide, up to 2,000 Black-tailed Godwit, and just 25 Bar-tailed Godwit, with 8 Goldeneye and 7 Goosander of note. 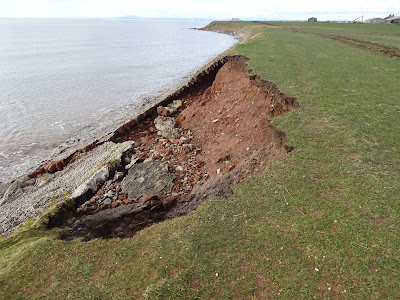 With a gale behind the latest 10.35m tide the sea has changed the landscape dangerously at Cockersand once again. Cockersand Abbey can be seen in the distance in right of centre.
Posted by Pete Woodruff at 11:46

That coastal damage looks scary. I saw my first stonechats last year in Wales. Quite a magical experience.