A Redstart, and Four-spotted Chaser at Holme Wood, and Stonechats on Hawthornthwaite Fell, were the top trio for my little black book. But blink and you'll miss the male Redstart. Eyes right of centre where the video arrow points to the small branch on the tree....View Full Screen.

Two young Redstart are now being fed at Holme Wood, but I found neither female or young on this latest visit.

Other good news from here was a Four-spotted Chaser, my first dragonfly of the year, and the Cuckoo made itself know to be present calling a few times. Also of note, two pair of Dunnock with a juvenile seen, 4 Grey Wagtail on Grizedale Brook, with 4 Mistle Thrush, a Treecreeper, Willow Warbler, juvenile Goldfinch, and a Buzzard over. Butterflies seen were 12 Small Heath and 10 Large White.

A hike up Catshaw - well half way up - to look for Ring Ouzel reported to me complete with a detailed map, wasn't successful, but that's what makes birding what it is. But 15 Meadow Pipit, 3 Willow Warbler, 3 Large White, a Small Heath, and a Brown Hare came as compensation for the effort.

On Hawthornthwaite, I was well rewarded by finding 5 Stonechat, including the first breeding evidence here, with two young seen. A lone male Stonechat put on a display, when I first saw the bird c.100m in the air, I thought it was a Meadow Pipit in silhouette, hovering for a few seconds, then parachuting down before leveling off to make a direct flight for around 200m. Also here, a Grey Wagtail which is scarce on Catshaw Greave, I don't recall the last one seen here, 8 Sand Martin flying around, with no colony established that I'm aware of, and 5 Meadow Pipit. Butterflies, 7 Small Heath and 2 Small Copper. 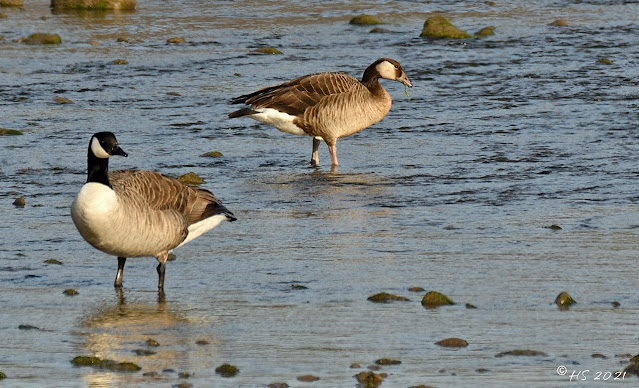 On 26 April Howards Stockdale took this photograph of a CanadaxGreylag on Conder Pool....Sometimes nicknamed 'Granada', this is a frequent hybrid combination. 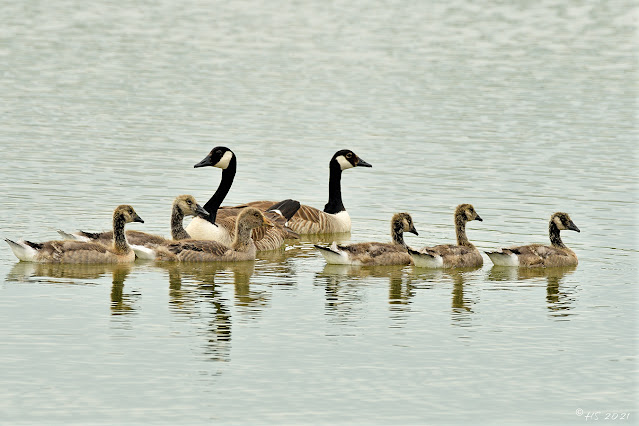 On 7 June, Howard got another shot, this time there was a surprise - third young from left - with this Canada Goose family on Conder Pool. Also here, the first Common Tern chicks were seen this week. 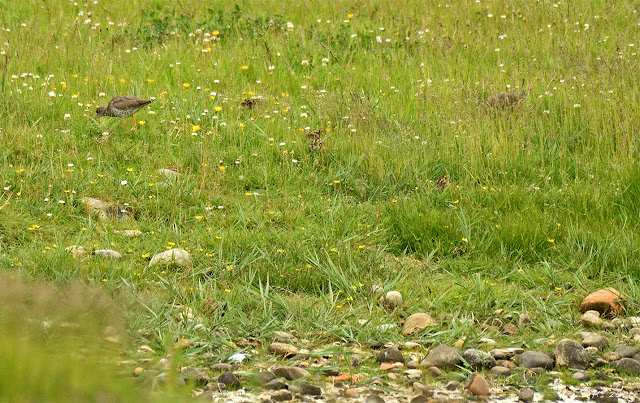 This record shot shows breeding evidence of a Redshank with four young on Conder Pool.
Thanks to HS for keeping in touch with info and images.
Posted by Pete Woodruff at 12:09