I can't really say nothing much to report, perhaps nothing much to impress is a little more appropriate, though in excess of 1,500 waders on the Lune Estuary at Glasson Dock was good, with estimates of 650 Redshank, 450 Lapwing, 180 Curlew, 150 Dunlin, 28 Black-tailed Godwit, and 4 Ringed Plover were all in view along the mud to the Conder mouth.

In the creeks at Conder Green, 8 Teal were the first returns I've seen here, with 4 Common Sandpiper seen. Up to 40 Swallow were at/around Conder Green Farm, and House Martin are still active at some of the five nests at River Winds, with birds attending a nest at Cafe d' Lune, the House Martin can have up to three broods. A Long-tailed Tit with a young was along the coastal path, with a Robin the only other bird seen here.

Conder Pool was quiet on Tuesday, with 6 Little Grebe, a few Redshank and Lapwing the only other birdlife of note.

The pool has an excellent history including a decent list of scarce/rare birds found there, the best of which has to be the White-winged Black Tern in 2003, but also includes Temmink's Stint, Pectoral Sandpiper, Black-necked Grebe, and Wood Sandpiper, any others I'd have to search for to remember. 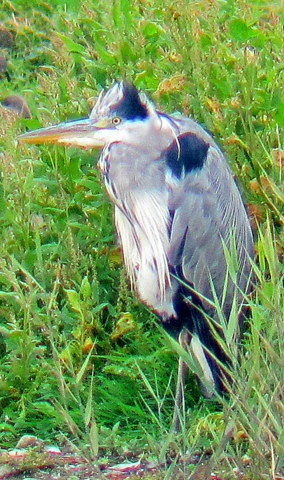 But this Grey Heron on Tuesday was a reminder of just one of the many predator species - including Mink recently reported - always around to threaten ground nesting birds in the breeding season, and that all these excellent records mask the darker side of Conder Pool.

Since finding a female Tufted Duck with 7 ducklings on 25 July, and more recently another female with 6 ducklings on 8 August, none of the 13 have ever been seen since, add to these one report of 10 young Avocet in June but not since, and the Mallard duckling I saw being carried off in the bill of a Carrion Crow, all amounts to 24 known young birds perished over a few weeks at the hands of predation on a grand scale, made even worse by the lone long surviving young Avocet which was within days of fledging also predated, a totally disastrous result for this small pool.

But thankfully, back on the lighter side of Conder Pool, the Common Tern have now had four successful breeding seasons in succession with all young fledged, and this year had some added security of nesting on the pontoon....brilliant records.

This video is brilliant, even more so full screen with sound if possible.