On Thursday, I attended the funeral of a good friend at the Catholic Church of Ss Thomas & Elizabeth at Thurnham. After the service on a nice sunny day, there was going to be nothing more uplifting for me than a walk along the coastal path from Fluke Hall to Cockers Dyke, and at 1.30pm I was within a few miles of getting there from Thurnham down the A588. 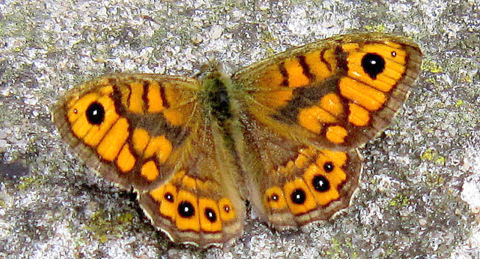 This was definitely a good idea, if only because I found my first Wall Brown butterfly in 6 years which was seen at Pilling Lane Ends on 2 September 2011. The irony being, today's butterfly was on one of the only three Ragwort stems left at the foot of the inland bank from the recent grass cut here on 25 July. Other butterflies taking an interest in the Ragwort and elsewhere along the path were, 9 Large White, 8 Common Blue, 6 Small Copper, 5 Gatekeeper, and 3 Meadow Brown.

Along the path, I saw a young Wheatear still sporting some downy feathering, and on Pilling Sands at Cockers Dyke saw up to 2,500 Dunlin, 350 Grey Plover, 45 Knot retaining some of their red breeding plumage, and 3 Sanderling, 6 Linnet  were on the marsh. 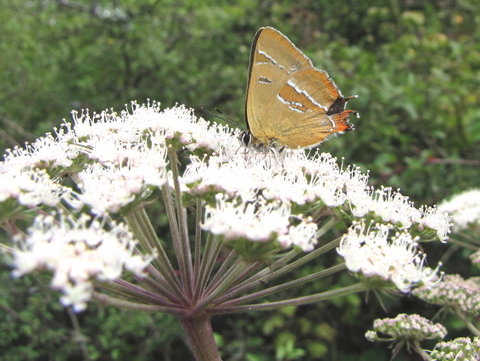 I was grateful to Steve Graham for passing on to me both the news and image of a pristine male Brown Hairstreak found on Wednesday at Gait Barrows Nature Reserve in Silverdale, along with 14 other species of butterfly.

The jury is still out on whether this is an introduction, or a small relic population that has been previously overlooked as it is a former resident at Gait Barrows. The nearest colonies of Brown Hairstreak are in Lincolnshire and Worcestershire so well north of these, but so is Silver-washed Fritillary.

Thanks again for this Steve, it added nicely to my own Wall Brown find after a 6 year wait.

Thanks also to Simon for the Hen Harrier header.
Posted by Pete Woodruff at 08:23

I'm sorry to hear of the loss of your friend, Pete, but delighted that you found a Wall Brown. We use to have a reliable spot for these only a quarter of a mile from my home. It was a relatively small patch of grass at a road junction. It must be well over 10 years since I've seen one now, however.

Think we can be pretty confident that this is an introduction and it will be interesting to see how successful it might prove to be. I have only just seen this posting and it would be interesting to hear an update on how the butterfly has fared this year. Down here in Worcestershire it has been a bit of an odd season with the butterfly emerging late and with many struggling to find adults. Our egg searches so far however have been very encouraging with evidence of a further expansion in range.