If your name is on the short list in a competition it's good news, you'll be in with a chance, and could be a winner. But this short list was the result of a couple of hours birding yesterday, and certainly wasn't a winner, despite a bit of effort resulted in very little....But, if the birds ain't there, then the list is going to be short.

Nine Greenshank were in the high tide roost on Conder Pool with 11 Curlew, also 16 Teal, with 6 Little Egret, a Stock Dove noted, and the customary multi counts resulted in 20 Little Grebe again. Twelve Snipe came up off the marsh - thanks Howard - and headed off over the estuary, 2 Goosander seen. 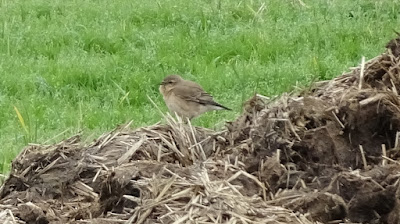 A brief visit to Cockersand saw a Wheatear, the smallest of Northern Wheatear I ever saw, the size of a Robin, and truly fooled me initially. Also seen, a Sparrowhawk, and at least 500 Curlew in two flights of 300/200 out over the marsh. At Bank Houses, 2 Swallow were on the wires, and similar at Lambs Farm, Moss Lane, and a Silver Y seen.
Posted by Pete Woodruff at 13:16

For some, me included, that would be a good day, Pete! Best wishes - - Richard