When I met Andrew and Michael at Conder Green, there was a couple of surprises in store for us all. Just when we thought we'd seen the last of the hirundines for 2019 save the odd straggler, the skies over the picnic area seen from Conder Pool, held in excess of 100 House Martin, widely spread and milling around. Prior to the martins, c.50 Swallow had been over Conder Green, and c.120 Goldfinch were flighty over the marsh and feeding on Sea Aster seeds.

This was followed by the surprise of 2 Pintail female on Conder Pool, and was another first for the pool, I can find none in my book in 16 years of watching here. Also on the pool, 106 Black-headed Gull, 18 Little Grebe, a Meadow Pipit, Kingfisher, and a Common Sandpiper, with a second bird seen in the creeks.

On the Lune Estuary, the recently ever changing number was of 550 Golden Plover today, 18 Snipe, 7 Black-tailed Godwit, 7 Greenshank, and 4 Mediterranean Gull being two adult and two 1st winter, a Black Swan was in the company of a juvenile Mute Swan. A short distance on the canal, between the basin and Christ Church, 5 Migrant Hawker seen. 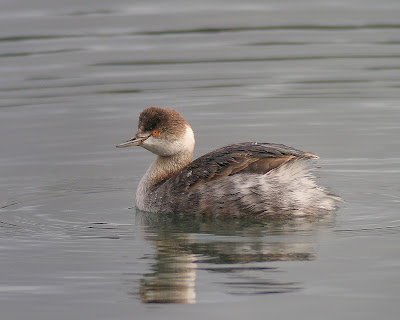 Although pretty laborious, especially now the number can reach a peak of twenty on occasions, the exercise of always counting the Little Grebe on Conder Pool, serves the purpose of checking individuals to find an odd one out amongst them again one day. I found a juvenile Black-necked Grebe here 11 years ago on 1 October 2008, it stayed for 17 days.
Posted by Pete Woodruff at 10:51

Interesting to hear of your late hirundines, Pete. Maybe the strange weather that we've had lately is responsible for this.

Len Blumin's image of the Black-necked Grebe is a cracker!

With my very best wishes - - - Richard