I got off down the A588 to Fluke Hall to see what was until today, thought to be a Pied or Black-eared Wheatear, the bird has been there since it was first seen by co-finders Paul Ellis and Paul Slade on 1 September. 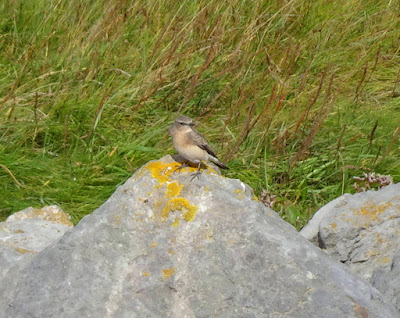 I was there for 20 minutes, before the bird finally showed, initially with 3 Wheatear, to give excellent views whilst ranging about 100m up and down the sea defences to pause obligingly for periods.

After a 152 post's discussion on Birdforum, confirmation of the birds identity today, has it as an adult female Eastern Black-eared Wheatear. There are many excellent images of the bird, including one showing finer plumage detail by Paul Ellis, which led to, probably clinching the ID. I recommend taking a look at this one Here
Posted by Pete Woodruff at 14:25

Hi Pete. Birds like this separate the professionals from the rank amateurs (like myself) - I'd have just put it down as 'a Wheatear' - full stop!

....'rank amateurs'(like myself)....me too. But it's not difficult to understand why twitchers twitch when you can go to see birds like this one.

Thanks again for looking in Richard.