My Thursday birding had a scrappy feel about it, never seemed to get into gear, and I nearly called off the second half whilst sitting out a lengthy downpour.

But I eventually went for it and got myself to Heysham to find 13 Mediterranean Gulls on Red Nab up to high tide, 9 adult, a 2nd summer, and 3 juvenile. It was a frustrating affair, in that I found two ringed birds, one green too distant to read, the other white flew off before I could get to grips.

An adult Arctic Tern was on Stage 2 outfall, and I had an hour by the light on the south wall fantasising about seeing Storm Petrels passing the harbour mouth....dream on. A Painted Lady by the entrance to HNR brought my total to 416 since the influx began. 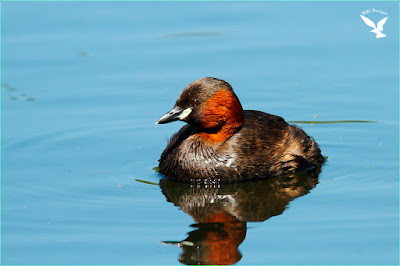 Earlier on Conder Pool, the count reached 20 Little Grebe today, with 4 Greenshank, 2 Meadow Pipit, 2 Stock Dove, and the Kingfisher showed again. Wednesdays Spotted Redshank gave good views in the creeks. I gave in on the Lune Estuary to escape the downpour, but not before I'd found a 1st winter Mediterranean Gull with a metal ring on its left leg, c.90 Golden Plover flew south overhead.

There's at least one Mediterranean Gull in the header picture....honest. A fraction of the gull roost on Red Nab which gives an idea how searching for these birds isn't at all straight forward.

Thanks to Bob Bushell for the excellent Little Grebe. Clik the pik, it's bigger and better.
Posted by Pete Woodruff at 19:10