The Stonechat At Last!

Conder Pool has been pretty hard work on recent visits, not helped by the departure of the Little Grebe, they have generally left Conder Pool by early December, though an exceptional count for the date at Conder Green was of 15 on 3 December, not one of which was on the pool. Yesterday 62 Curlew were accompanied by a lone Black-tailed Godwit, a Snipe was on the small island, and a drake Goosander brought up the rear. 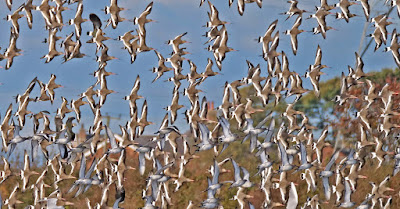 On the Lune Estuary, an impressive mix of up to 2,000 Black-tailed Godwit and Bar-tailed Godwit were estimated at 75/25 respectfully, 26 Goldeneye was this winters peak count here to date.

On the canal basin, it was good to find a pair of Pochard, seen as a declining winter visitor to Leighton Moss RSPB and Pine Lake, and at best irregular elsewhere, the last one on the canal basin at Glasson Dock was a drake on 26 November. Also seen, 2 Goosander and 27 Tufted Duck.

At Cockersand, the male Stonechat seen opposite the Caravan Park, and was virtually my last bird of 2019. AC tells me the bird has found an ample food source of caterpillars on the marsh edge. Up to 95 Fieldfare were accompanied by a Mistle Thrush in a field adjacent to c.350 Curlew, also a Reed Bunting and Kestrel noted.

On a wander through Williamson Park yesterday with KT, a Little Grebe was on the old reservoir at Fenham Carr, good to see at least one remaining after they bred there this year with five found 18 August. Also noted, a Great Spotted Woodpecker, a Jay, Nuthatch, Song Thrush, and Long-tailed Tits.
Posted by Pete Woodruff at 11:45