....all my troubles seemed so far away. Not sure about that, but I got some birding in and noted the notables around the Lune Estuary.

I've been seeing good numbers of Goosander recently, and found 12 on the River Lune at Glasson Dock on 18 November, I don't recall seeing a double figure of the species on the estuary before, and on Conder Pool yesterday, a good count of 9 Goosander was a personal best here, 21 Wigeon and 15 Curlew also seen, and a lone Redwing was in the hedgerow. In the creeks, 3 Little Grebe and 82 Teal was a low count. I saw 14 Blackbird at Conder Green including 10 along a 100m length of the coastal path. On the Lune Estuary at Glasson, 10 Goldeneye, and on the canal basin 2 Goosander.

It was good to find the male Stonechat at Cockersand, it was in the rough field behind Lower Bank House again. Up to 160 Fieldfare are still around, with 140 Curlew in fields, and 120 Black-tailed Godwit were off Lighthouse Cottage, also 12 Greenfinch seen. 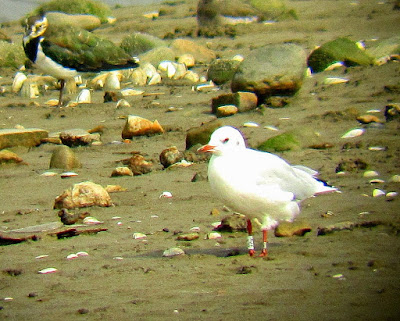 I found the ringed Black-headed Gull on the canal basin at Glasson Dock yesterday, and is my third sighting of this bird. Seen each sighting on the Lune Estuary at Glasson Dock 26 September 2014, 17 November 2017, and 8 January 2020.