......and just a pair of bino's round my neck today, too cold to be standing around with a cruel north wind blowing in your face counting waders and in any case the tide was at its height at Glasson Dock rendering the Lune Estuary too much water but here goes......

At Conder Green I must first note not having seen the Common Sandpiper here since 2 November though it has been reported twice on the LDBWS website since that date. The Spotted Redshank obliged in the creeks as did a single Grey Plover, 2 Little Grebe also here by way of a change. Conder Pool was going to be recorded on the blog this evening as 'deserted' but - as if to prove the point that there are so many areas on here which are out of view - a Sparrowhawk over the entire length of the pool transformed it from desertion to there being in excess of 155 birds in seconds, with at least 85 Teal and 62 Mallard, a pair of Wigeon, a Goldeneye, 3 Little Grebe, and 9 Snipe in the air. From the picnic area I saw in excess of 3,000 Knot huddled out of the sight of almost everyone on the bank of the Conder Estuary, also 17 Black-tailed Godwit and 18 Bar-tailed Godwit noted. On the canal basin at Glasson Dock I noted 4 Pochard drake's and a Little Grebe.

At Cockersands I'm not proud of the fact that with my telescope still firmly locked up in the boot of my car I totally ignored any waders present but walked the headland and returned via the road to record the male Stonechat at the lighthouse end for its 28th day on the same fence posts for four consecutive sightings over this period......fascinating creatures aren't they! Also 12 Greenfinch seen again - which prompts me to note I should comment on Birds2blog at some point on a good number of the species disappearing from a location in Lancaster - a solitary Black-tailed Godwit was on a flood with 22 Lapwing, a Little Egret was by the pool in the field NW of Bank Houses where it was seen on several occasions last winter, a Song Thrush, Sparrowhawk, and a Brown Hare.

And with just four hours available for birding today back at the lighthouse meant the end of the day unfortunately. 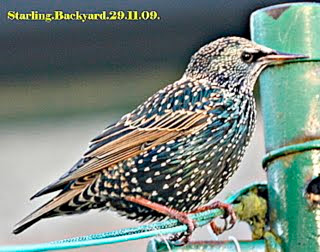 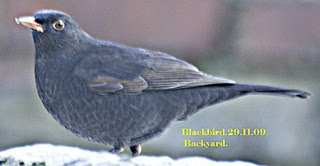 For anyone who knows John Bateman and hasn't already seen these two images above on the LDBWS website, I'm pleased to pass on the news that John is feeling much better now and has had the enthusiasm to get outside his house to photograph the Starling and the Blackbird. Hopefully perhaps by the New Year he will be able to accompany me on the 'Coastal Run' once again.
Posted by Pete Woodruff at 21:24