Well I was really pushing it today, but with the weather as it has been and still is, if I don't then I'm never going anywhere. As I turned left going south at the top of our road this morning the sky was black as midnight and already I was muttering to myself 'why are you doing this', however I did manage 3.5 hours before I finally gave in and came home......this is becoming too much.

Two birds managed to 'cheer me up' the first was at Conder Green where the Spotted Redshank was found in the creeks with its commoner 6 Redshank relations, also noted here were 12 Snipe in the air together, on the pool I could only find 5 Little Grebe today, also just the one Goldeneye, a single drake Wigeon, and 85 Teal was an increase from Monday. 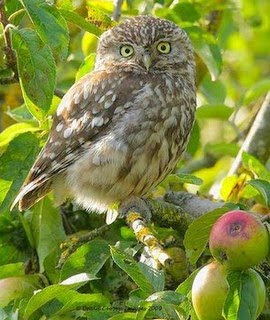 The Lune Estuary was on another unimpressive day with c.220 Redshank, an estimated 1,000+ Lapwing, 4 Goosander, and 2 Goldeneye of note. On Glasson Marsh from Bodie Hill quite impressive numbers of c.1,500 Golden Plover and 3,000 Lapwing to note with presumably either the Merlin/Peregrine Falcon giving them a hammering but neither of which could I pick up.

By now I was getting rather more than pretty fed up of dodging the showers AGAIN but decided against my better judgement to go to Cockersands where at least I found the second bird to 'cheer me up' in the male Stonechat which was yet again on the same fence line as the previous three sightings since 9 November, and c.12 Greenfinch which I was now viewing in a hail storm and decided do the defeatist act and departed for Lancaster.

Thanks to David Cookson for the excellent image of the Little Owl in the centre of this post......Thanks David.

Your day reads like a rerun of most of my recent ones. It will surely stop raining and blowing soon? Keep at it.

A better day today (Friday) weather-wise and with 4 Snow Geese on Aldcliffe Marsh albeit 'dodgy ones' posing the question......whats a 'dodgy' Snow Goose?

Thanks again for looking in Phil.