There was no more than 40 Teal at Conder Green yesterday, but despite sifting through every last one of 'em, I failed to see the juvenile male Garganey....another first for the green, been here since 28 September.

Conder Pool is more appropriately called Conder Lake once again, and the best of four attempts resulted in 13 Little Grebe, with a few no doubt finding plenty of hiding places in the channels and out of view behind the islands. Otherwise quiet with 3 Greenshank and 21 Curlew making up the numbers. Two Goosander were in the creeks, and a Red Admiral can't have been the happiest butterfly on the wing today, windy, and lashing it down 15 minutes earlier. 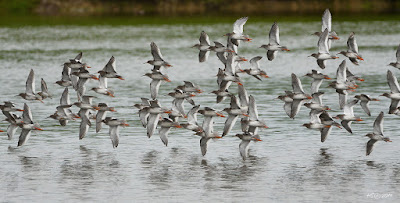 The left legged Curlew Sandpiper with injury to it's right leg, seen again on the Lune Estuary as last Thursday, it was accompanied by a Ruff, with Redshank and Dunlin amounting to little more than 200 birds. Of c.380 Greylag seen, I reckon those to make up last Thursdays count of at least 620 were out of sight upriver below Colloway Marsh where I counted 16 Canada Geese. A Great-crested Grebe and 17 Wigeon were noted, the Golden Plover were noticeably absent.

Four skeins of up to 300 Pink-footed Geese SW over Bowerham this morning, also a Red Admiral in the garden.

Thanks to Howard for the in flight Redshank and lone Dunlin, and to Martin for putting the record straight, that we've not had a Stonechat image on B2B for ages.

P.S....This is amazing, and a First for Ireland
Posted by Pete Woodruff at 12:26

You can't beat a good Stonechat, Pete, as you are well aware!!! With my best wishes - - Richard