The Parish Of Aldcliffe And Beyond.

On Monday I went for another two pennyworth of the Snow Bunting on Plover Scar, saw a Sparrowhawk disappearing into a bush at Bank Houses, a Buzzard soaring over Abbey Farm, and a little evidence of Skylark and Meadow Pipit movement. Notes from the Lune Estuary included 128 Curlew, 11 Snipe, and 5 Goosander. On Conder Pool, 9 Little Grebe, 3 Greenshank, drake Goosander, and 5 Tufted Duck.

Yesterday I did a circuit of the parish of Aldcliffe and was asked by a regular birder here if I had a permit for the area, but I seemed to get let off the hook even when I said I hadn't!....Good to see you again Barrie.

On Freeman's Pools, 15 Gadwall, up to 60 Teal, 6 Tufted Duck, 4 Wigeon, and a Little Grebe noted. Off Marsh Point, 122 Herring Gull with a lesser number of Black-headed Gull. In the harvested maize field, c.250 Greylag and 62 Canada Geese, and on the Wildfowlers' Pool, the female Scaup had the place almost itself, this pool would be more appropriately called Aldcliffe Wetlands, and the birdless flood called a lake.

On the Lune Estuary at Glasson Dock, c.650 Black-tailed Godwit and 250 Golden Plover, with 8 Wigeon and 3 Goosander drake noted. A Merlin was squat quietly on the south end of Colloway Marsh. At Conder Green, 8 Little Grebe were seen as four in the creeks, and four on Conder Pool with a Greenshank to note, a Kingfisher flew the length of the pool, and 4 Tufted Duck seen numbered five on Monday, today the drake was missing. 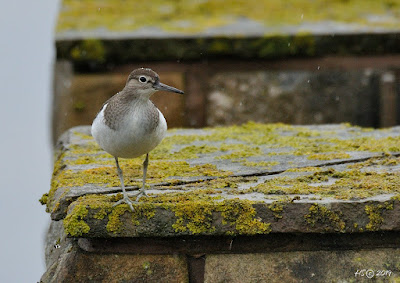 Despite five visits, I've not seen the Common Sandpiper at Conder Green since 13 October. Many thanks to Howard for the image.
Posted by Pete Woodruff at 09:22

That's a lovely list of birds there Pete. Hoping we get a few Snow Bunts at Reculver this winter.

A fine tally of birds, Pete. Sadly, it's beginning to look as if I wont get my annual Snow Bunting fix in 2020 - unless I'm very lucky - as I'm not having a Scottish winter break!