Looking over a stretch of the River Lune at Bull Beck on Thursday, a few minutes after I had found a Little Ringed Plover on a shingle bar, distant in the sky, there's this large lumbering bird flying upstream, then dropping down out of view. Yep, it was an Osprey. Well....that was a good idea, nice, very nice indeed.

My excitement slowly calmed down, and I went on to find 2 Common Sandpiper on the river, a Little Egret flying upstream, a Buzzard over, a Willow Warbler, and 2 Blackcap.

Hyperactive Sand Martin were in good numbers at a couple of colonies on both banks of the river.

View Full Screen
I walked from Hornby, down the River Wenning where a Kingfisher was seen flying upstream. Also noted, Treecreeper, Song Thrush, Willow Warbler, Blackcap. A Grey Wagtail and 2 Goosander on the river, a Buzzard over was harried by a Carrion Crow, also c.50 Sand Martin seen. Butterflies seen were 3 Small Tortoiseshell and a distant small fast unidentified white, presumed female Orange Tip, the true sign of spring.
Watching the Wenning as it flowed into the Lune at the confluence had quite a calming effect.
View Full Screen
In it's infancy as a small stream, the source of the River Lune is at Newbiggin in Cumbria. The river which runs through stunning landscape throughout it's length, has up to 100 tributaries, including the River Wenning at Hornby. The journey ends when it reaches Plover Scar at Cockersand, where it flows into the Irish Sea, 53 miles from it's beginnings.

Info from an insider earlier in the week about a bird in Bowland, had me heading there, but failing to make any connections. So I gave Hawthornthwaite another lookover, where I found a lone male Stonechat, at least 500m away from the location of a pair seen 1 April. Four Sand Martin were patrolling over and around Catshaw Grieve, 2 Buzzard were good to see soaring together, soon followed by a male Kestrel. Also, they came two by two, Red Grouse, Meadow Pipit, Wren, and Lapwing on territory.

Geese were dropping down off Hawthornthwaite Fell in ones and twos, had me finding later that they were 82 Greylag gathering in a field. I watched 24 Curlew come down into a field opposite at Isle of Skye Farm. 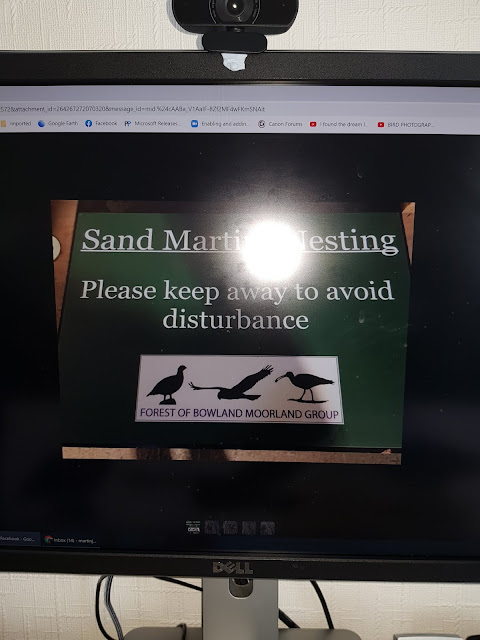 This sign has now been erected at Cam Brow
I'm hoping all the sun seeking picnickers and photographers will heed the message at this small but significant Sand Martin colony in Bowland.
Posted by Pete Woodruff at 11:39

I've never seen a Sand Martin colony as magnificent as that one, Pete! I could sit there and watch something like that for ages.

Things seem to be getting more comfortable Covid-wise in these parts and Lindsay and I have our second jabs on Thursday. Will still be taking great care, however. Stay safe - - - Richard

Hi Pete... I love Sand Martin... Beautiful video of lune river.. A lot of birds and wild life... Thanks for sharing... Cheers 🌞