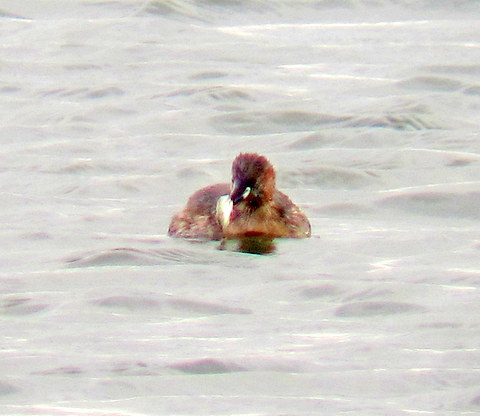 There was the sum total of 26 birds on Conder Pool on Thursday, of which were 9 Little Grebe, 7 Cormorant, 2 Little Egret, a Grey Heron, and a Mallard. A closer look around the edges produced a Wheatear on the far bank, and in the creeks 2 Common Sandpiper.

I was wrong to include all six Tufted Duck chicks in my list of twenty four presumed predated young birds on Conder Pool this year, despite four visits since I first saw them 8 August I had no further sightings until today when I saw the female accompanied by four of the initial six diving merrily, thus reducing my 'jumping the gun' figure to twenty two.

On the last remaining mud on the Lune Estuary before the tide took over, c.450 Redshank, barely a double figure of Dunlin, a Greenshank by the Conder mouth, and an adult Mediterranean Gull on the far side. On Jeremy Lane, a Wheatear seen in a ploughed field. 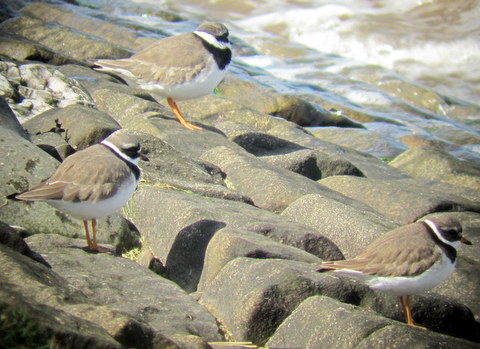 The scenery had changed considerably at Plover Scar near high tide, with just 250 Dunlin and 6 Ringed Plover seen today. I hung around to see if anything else would turn up pushed off elsewhere by the tide, but to no avail. On fence posts running from Abbey Farm, 8 Wheatear and 3 Meadow Pipit were on the lookout.

Four Buzzard were soaring high together above Bowerham, Lancaster on Saturday morning.

I've been watching two Whooper Swans all summer in the 'Lapland Bunting' field at Cockersand until 26 June, after which I only saw one bird until 4 August, since when it too has been nowhere to be found, just a lone Mute Swan and Greylag today.

But as I drove away from Cockersand along Moss Lane, I noticed a white mound in the field. Parking up I went into the field to have my suspicion proved right and found a dead Whooper Swan. Not a very good image, but one of the Satin Wave seen at Cockersand. A moth with markings no more obvious than the faint grey cross-lines, fairly common in the south of England, it becomes scarcer further north, but with four reported at Fairhaven dunes 20 August, this is at least a decent moth for Cockersand.

Thanks to Howard Stockdale for the excellent Leighton Moss Purple Heron header.

With thanks to a contact, the moth ID has to be corrected to read Udea lutealis.
Posted by Pete Woodruff at 08:18

The moth is Udea lutealis, a late summer resident pyralid, but there was a Satin Wave in the moth trap over the river at Sunderland Point a few nights ago - its very thin on the ground up here along the coast, but much commoner in the Formby area

Thanks for the correction Pete.

I was going to invite contradictions in this post to my ID on this moth, but changed my mind and decided to be positive about it.