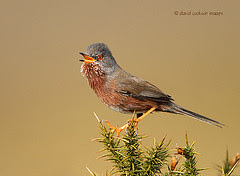 Dartford Warbler. David Cookson.
The intention was that I did a post this evening on the Dartford Warbler until I realised I had already done one which - if you're interested and haven't seen it before - is HERE the photograph has also had pride of place on Birds2blog before, but it's such a brilliant example of the bird and the photographer that its here again.
It's either a bit weird....something of a coincidence....or there is a direct connection but....five visitors to Birds2blog today have accessed the above linked post about the Dartford Warbler and, well wait for it....one reported this afternoon on the RBA pager service as being at Arnside Park which is in Cumbria though inside the LDBWS recording area.
A couple of points to make here....You will have noted at pole position in my sidebar the RBA link with the 'Getting The News Out' caption, and there are one or two who cry out for this idea of letting everyone know about 'whats about' as soon as you've found whatever it is you found, and lets face it that's what RBA are all about, and that's why I subscribe to it. But the cry didn't get through to whoever found this little 'stray' and he/she certainly didn't get the news out 'cos it was broadcast at 3.19pm when the bird had been found at this location almost six hours earlier at 9.30am. No doubt there's an explanation for all this, and no doubt the gunfire is heading my way right this minute with regard to this subject, but I reckon this could be someone having a practice run for April Fools day!


And whilst we're looking at DC's Dartford Warbler once again, here are two more 'Cookies Crackers'.... 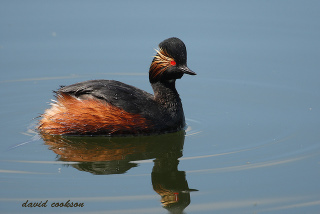 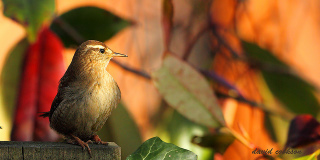 Wren. David Cookson.
And the delightful little Wren. Always lots of excellent photographs to view on DC's website, so please treat yourself from time to time HERE


Apparently a Common Sandpiper at Jubilee Tower on the Trough of Bowland road today.
Posted by Pete Woodruff at 20:25

Confused by your posting, Pete. I was informed about the Dartford Warbler after dark yesterday via a third party who had been old about it just a short time previously. A grid ref was worked out courtesy of RBA and I posted it on the LDBWS site straight away (as you can see). The two locations I have been in since I told RBA are neither very good for pager message reception and I assumed lack of any mention = message missed due to reception. All the feedback I have received today is that the bird was searched for at yesterday's site at Park Point and not seen. Is this belated report today from nearby Arnside Point??? PS your anti-robot letters are completely illegible so this probably worn work!

I'm even more confused than you now Pete.

You say you received news via a third party after dark on Tuesday of a Dartford Warbler earlier in the day.

The mystery deepens....and you received feedback that the bird had been searched for on Tuesday too, obviously 24 hours before the news broke with RBA the following day (Wednesday).

But - although not usually a topic of mine - the point I made in the post was related to 'Getting The News Out' and I'm sure everyone must be thinking in the case of this individual (Dartford Warbler) at Arnside which did'nt 'get out' until the following day according to your comments here....I wonder why?

OK....So a re-read by me of Wednesdays RBA message has me to now realise it was for 'negative news' on the Dartford Warbler at Arnside.

But if we're going to continue to discuss 'Getting The News Out' the issue is....how come it didn't when it was found, and when was it found?

And by the way, I have no interest whatsoever in 'by who'.

RBA were phoned by me at circa 1015pm on Tuesday with the news and the grid ref for the site established after RBA checked a map at their end. Didnt think anything more of it as didnt have time to check for the bird myself. I suggest you talk to RBA if there was a problem. I miss a few pager messages due to reception problems so just assume any lack of info is due to that

An almost complete lack of interest here Pete, in a 'mega' bird for our area, and for some strange reason I've seen no evidence of anyone's pulse racing over this bird.

I've not for one minute doubted yourself nor RBA involvement once the news got through to you and in turn you contacted them. But nobody has yet come on the scene to say they found it and why it wasn't published, and it ha been dark at least four hours before even you heard about the bird

I have a pretty good idea whats going on here Pete....and so have you.