Owt About In Bowland.

Time flies by, and it was last week when the little black book says the weather was cloudy with a little sun, and I took a look in on Hawthornthwaite Fell.

I struggled to find 3 Stonechat, two seen as a distant pair far up on Catshaw, and a lone bird heard scolding. Also noted, 12 Meadow Pipit and 2 Wren, a Grey Wagtail was on Catshaw Grieve, with 8 Sand Martin, a Buzzard overhead, and 8 Small Heath butterflies seen.

The most interesting aspect of the visit, was the sight of bumblebees, seen for around 100m along the grit track on the lower slopes of the fell nectaring on the nettles. 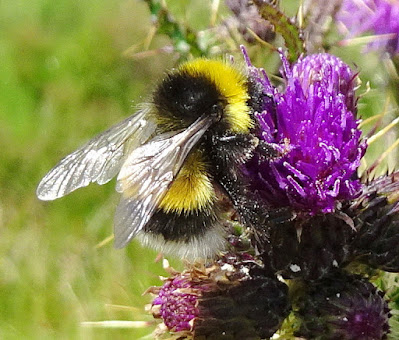 White-tailed Bumblebee Bombus lucorum. Pete Woodruff.
The taxonomy of the White-tailed Bumblebee is complex, and as I'm not a scientist, I'm going to avoid to much of it here.
The Bombus lucorum label has been used to include two other species, B.magnus and B.cryptarum. I've recorded the ones I saw last week as 60 White-tailed Bumblebee, probably B.cryptarum which is to be found more commonly in the uplands, with Bombus lucorum regarded to dominate the lowlands.
I'm grateful to Dave Bickerton and Ben Hargreaves, for their help and contributions on this subject.
I was really chuffed to finally locate the Spotted Flycatchers at Tower Lodge, with excellent views of two adult and at least one juvenile seen. These are the only pair in this are this year, though I did find a lone bird 22 June at the plantation at Marshaw. The House Martins are still visiting the nests at Tower Lodge.
View Full Screen
A wander along the Marshaw Wyre to Trough Bridge. Along the way, I found the FOBMG nest box to be deserted and birds moved on. The female Pied Flycatcher seemed to have endless energy to and fro the nest box feeding young, with never a male in sight on every visit I made here.
A welcome surprise was a Common Sandpiper still well upstream, also 3 Grey Wagtail. The only disappointment today was, I've still to find my first Dipper of 2021 in this area.
Posted by Pete Woodruff at 14:12