A lovely day to chill out and sit on the sea wall at Heysham and check out a decent gull roost up to high tide.
I panned through the c.200 gulls half a dozen times, the best count that came up was 16 Mediterranean Gull, many - but not all - hunkered down in the distance on Red Nab and identified only by the magnificent full black hood, and just one seen as a sub-adult bird with small black primary markings. But some showed their unmistakable all-white flight-feathers, large black hood, and scarlet bill, including the green ringed bird, probably the one ringed ANLT in Germany as a nestling 9 years ago in June 2012 and a visitor to Heysham every year since 2017....Beautiful creatures. 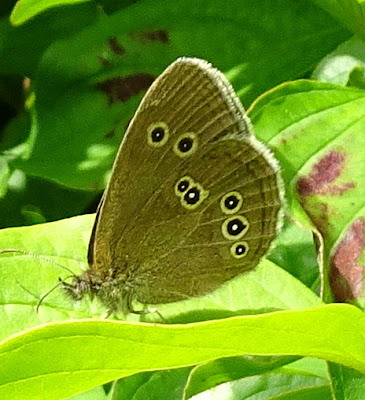 Ringlet Heysham NR. Pete Woodruff.
At Heysham NR, birds heard, 2 Chiffchaff and a Blackcap. Butterflies noted, 18 Ringlet, 14 Small Skipper, 8 Meadow Brown, 4 Large White, and 2 Gatekeeper. The large and conspicuous male Emperor Dragonfly patrolled the pool which it had to itself. 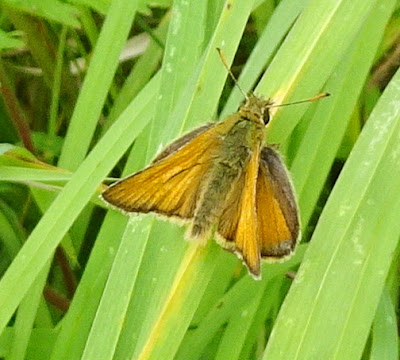 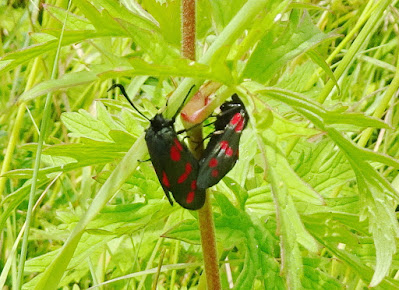 Six Spot Burnet Heysham NR. Pete Woodruff.
The Burnets appeared to be joined at the hip. 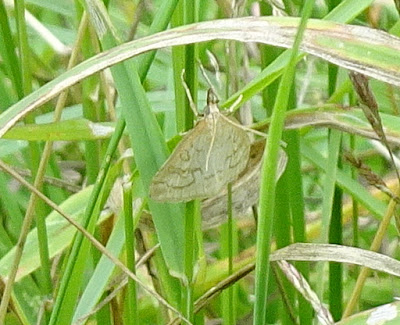 Udea lutealis Heysham NR. Pete Woodruff.
If I keep at it, one day I'll find a moth with a bit of class!
Posted by Pete Woodruff at 08:42

Happy Sunday and next week to you too Ana.

Hi Pete. It's good to see a blog post from you featuring butterflies and a moth, even if they aren't exotic. Just seen you've put up another post while I was writing this - going over to it now!

At the same location Heysham NR, I found 52 Ringlet on 4 July 2019. The exotic moth awaits me, I just have to find it Richard.