I was raring to go this morning and set off for Hawthornthwaite Fell with a 'birding buzz' about me, but it was all a mistake. I should have shown a little more intelligence and realised the roads into the Trough of Bowland would be bad - rain yesterday and freezing ever since - and in fact proved worse than bad but treacherous in places and to make matters even worse the results for my efforts four hours later when I abandoned the exercise were abysmal. Of course the visit to Hawthornthwaite was to fulfil a hope that I'd find at least one Stonechat up there....pure fantasy.

The pull - a bit like walking up a house side in places - to the top of the fell produced at least 11 Red Grouse and a Kestrel flying purposefully. 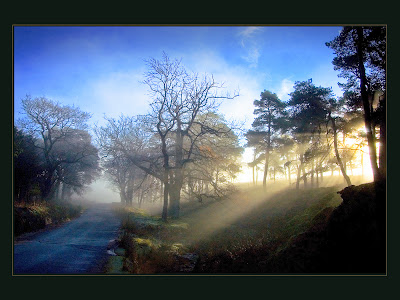 I decided I'd got this far into the Trough so went on to Marshaw with at least four species in mind, and set off to cover as far as Tower Lodge and on beyond Trough Bridge, but it soon became obvious it wasn't to be today and my notes read, c.45 Fieldfare, a single Redwing, 6 Long-tailed Tit, 2 Blackbird, a Wren, Blue Tit, Great Tit, Coal Tit, a Buzzard, and c.120 Wood Pigeon, that's just ten species, and just 59 birds not including the Wood Pigeons....not good. It was still below freezing and the roads if anything would be getting worse, so I left. Thanks Peter, for the brilliant early morning sun and mist in this area of outstanding beauty.

If you're birding during the summer months in this area around the Tower Lodge its a good idea to go up this path making sure you take the first right midway up the track to check the area above and below the rear of the plantation for Redstart and Spotted Flycatcher. The pic not today by the way, but a few weeks earlier last year.

I decided to look in on Conder Green before my enthusiasm was lost altogether and on the drive there called in on the canal on the Cockerham Road to find a Kingfisher, also 2 Buzzard overhead being mobbed by corvids. At Conder Green I noted just 3 Little Grebe, and a Little Egret on Conder Pool, and c.150 Teal in the creeks before my passion had deserted me....hopefully just for the day. 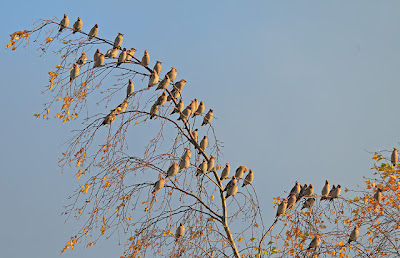 I found another excellent image with a difference. This one is a brilliant composition of the Waxwings void of green leaves and red berries....Nice one Martin and thanks a lot.
Posted by Pete Woodruff at 21:16

Pete. Very wintry at the moment..could be snow tomorrow. I am sure you still enjoyed yourself despite the lack of stonechats etc. Lovely pics from yourself and Peter Guy.

it's amazing how they all rest as a group