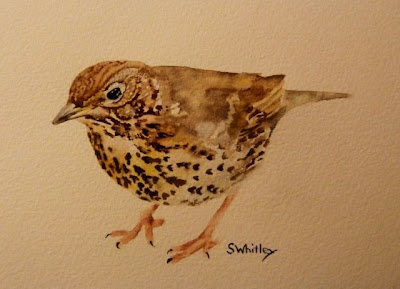 I collected three excellent counts on Tuesday on the walk from Lancaster to Glasson Dock, the best of which had to be 10 Song Thrush.... 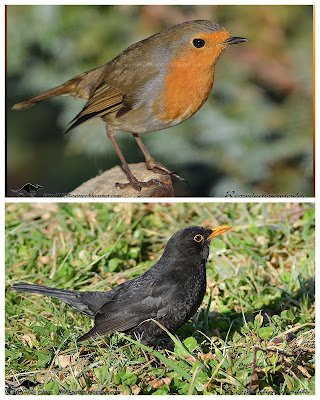 ....closely followed by 22 Robin and 48 Blackbird, I think the latter already being established as an influx into the UK this early winter.

Other notes on this excellent walk following the River Lune downstream to Glasson Dock on a brilliant if very cold sunny day, a reasonable count of 10 Goldeneye seen between Skerton Bridge and Marsh Point. I'm not seeing many Goldeneye reports, and of those I do few reach a double figure, another excellent sight was that of a Kingfisher flying across the river just upstream from Marsh Point. Other sightings to this point of the river, a Goosander, 8 Grey Heron, a Kestrel, 8 Goldfinch, and 2 Sparrowhawk perched on fence posts within 15 mtrs of each other. On the now seriously flooded and frozen Wildfowlers Pools I counted at least 30 Moorhen feeding as a group, I personally know of no other location where this number can be seen together. Most of the geese were on the far side of the river on Heaton Marsh and out of range for detail through binoculars, the ones in range from the embankment on Aldcliffe Marsh were all c.250 Canada Geese.

Other notes made from Aldcliffe to Conder Green, good numbers of Lapwing and Redshank were feeding in the fields joined in one by 2 Golden Plover, also seen, 2 Dunnock, 3 Linnet, 12 Long-tailed Tit, and a Raven heard out of view, a pair of Red-breasted Merganser were seen off Nansbuck Cottage.

I could afford little time at Conder Green but noted a 'few' Fieldfare, 2 Redwing, and 6 Long-tailed Tit. On Conder Pool - by which time I had to keep my eye on my watch - I saw just 5 Little Grebe, 5 Snipe, and yes you guessed it....my bus is coming.

Thanks to Sharon for the excellent painting of the Song Thrush, and to Noushka for the equally excellent photographs of the Robin and Blackbird. 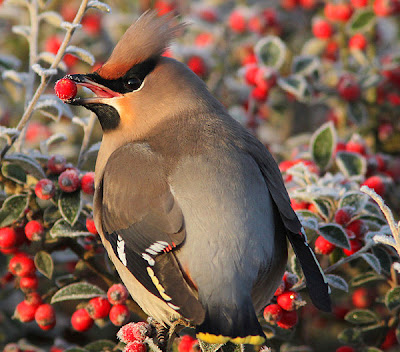 ....and another waxwing too, this one from Marc Heath ....Don't forget to 'clik the piks' they really are bigger and better. Thanks Marc, brilliant.
Posted by Pete Woodruff at 20:08

Pete.What a super day you had on your patch.Great variety and excellent numbers of birds with good weather.A long time since I saw a song thrush,ten is remarkable.Well done and take care.

Good to see you out for a great day's birding - and I'm so honoured that you've chosen my song thrush painting to illustrate your findings - thank you, have a great weekend!

A great account of a wonderful days birding Peter.These images have certainly brightened up a wet and miserable day.

Ana thanks....Iv'e been looking for you!