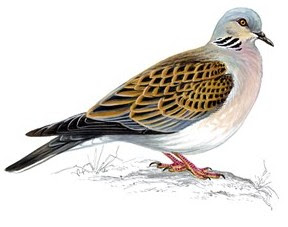 These two species of birds are once again telling us that some of our wildlife is in crisis, and that they are heading to become just two icons as memories in the 'Twelve Days Of Christmas' festive classic.

Birds which are reliant on farmed landscapes are continuing to decline dramatically, and the Turtle Dove (TD) and Grey Partridge (GP) are displaying alarming reductions in their numbers. Once widespread particularly in southern Britain, the TD population is hanging on a thread in the UK, with almost 60% lost in the five years to 2010. The loss of six out of ten TD's, and three out of ten GP's over the same period is surely nothing short of a wildlife disaster. The TD is in serious danger of becoming a population of fewer than 1,000 pairs by the middle of the next decade, leading to the distinct possibility of complete extinction. 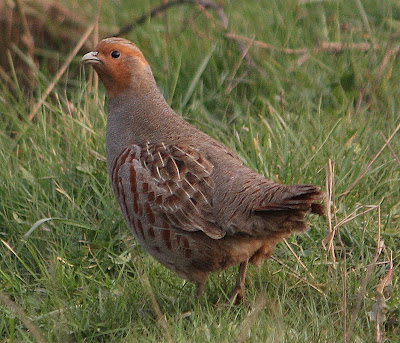 The UK population of Grey Partridge has been estimated at around 43,000 pairs, but this has also fallen by 30% over the same period as that of the TD. One farmer has claimed....with funding for wildlife-friendly farming, increases of Grey Partridge numbers have been noticed, but most noticeable this summer has been up to eight Turtle Doves compared to just one bird. But this farmer goes on to say....with species like the TD and GP in such rapid decline it is of concern that the reform of the Common Agricultural Policy may not ensure funding continues and is enhanced to help the farmer to help his farm wildlife. 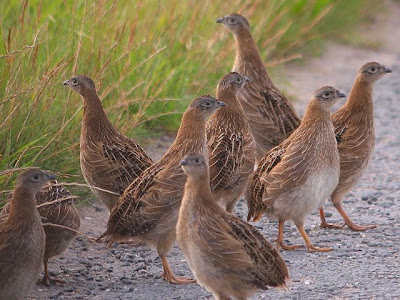 Nine juvenile Grey Partridge of the twelve along with two adults GG saw in July 2011. I can't help but feel these arrived in the UK in cages labelled 'imports' but I wish I could be proved wrong by someone.

Many thanks for the photographs Geoff....A rare sighting of a bird almost a rarity, and therefore rare and excellent images....

Iv'e never seen a Turtle Dove in my life....birding or not birding!
Posted by Pete Woodruff at 14:01

No Grey partridges here Pete for the last 8 years! Turtle Doves are clinging on with 2-3 breeding pairs :-(

I'm still lucky by the sounds of it with these at Reculver, 2 heard this morning whilst sitting on the car. Some nice shots of them though here.

Hi Peter i love turtle Doves!!!.. are so beautiful.. Greetings..

I didn't know their numbers were dropping

Warren....I like to see things realistically and this is not looking good.

Ana....I love Turtle Doves too though yet to see my first believe it or not.

Adam....Yes, certainly dropping, sorry to give you this bad news.