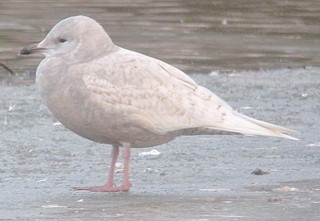 Iceland Gull. SP.
﻿
A few brief notes with no photographs of the Snow Bunting but to add some interest to the post this image of the juvenile Iceland Gull currently either on Bourbles Pit or Cockers Dyke in the Knott End area is an excellent substitute with my thanks to SP.
It only takes a glance at the 2009 LDBWS Annual Report to see the Snow Bunting (SB) is a scarce winter visitor to our area with just two birds - both male - seen in that year which actually could very easily have been the same one in both records nearly two months apart.
In Lancashire as a whole the bird is regarded as a 'fairly common winter visitor' with the average number recorded over 22 years to 2005 being 120 annually. However, the SB is a bird prone to wandering during the winter and some duplication is very likely. You have to search back in history to find numbers like the 200 SB's found at the West Lancashire coastal hamlet of Hundred End over 80 years ago in 1929.
The SB visits habitats along the coast in Lancashire and on moorland summits, during a notable influx in 1984 a sighting of 50 birds was recorded on Clougha Fell, this was in the days when I myself totally disregarded this area which - for over more than 12 years - has become one of my most favourite upland birding haunts. As far as the coast is concerned the only place I personally ever found the SB is at Cockersands.
Ringing recoveries in Scotland seem to suggest the majority of wintering SB's are of the Icelandic race insulae but some have the opinion that birds resembling the Siberian race nivalis are also thought to occur. The only ringing recovery was that of a bird found dead in Liverpool in 1990 which had been ringed in Kent in 1988.
I've always had a liking for a gamble but one thing for sure, I'm not having a bet on finding a SB anytime this winter, though thats not to say I won't do.
Three interesting reports I've seen today are those of a Velvet Scoter on the River Lune in Lancaster, 1,000 Brambings in Grange-over-Sands in Cumbria, and even more interesting to me personally, a male Stonechat at Fluke Hall yesterday, thanks for that one BD, much appreciated.
And finally.... 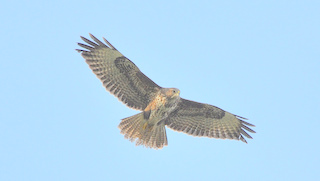 Buzzard. Gary Jones
More variation in the post with an excellent in flight shot of the Buzzard with my thanks to Gary.
Posted by Pete Woodruff at 19:08

Hi Pete. Male stonechat still at Fluke Hall today close to car park. I remember a snow bunting in this same spot a few years ago.
Very Arctic along the sea wall today with ice floes and super views of a snow covered Lake District plus many pinkfoots in the area. Hope you manage to get out this week. Take care.

Thanks for the Stonechat info Brian, much appreciated as you know.

Yes, excellent views across the bay today, we were at Morecambe.

Thanks for looking in again Brian.