Those 'Other Things' Again!

Several 'other things' - not least the weather - all played their part in the prevention of any birding again today bringing about another one of those 'gap fillers' to Birds2blog. Some reckon non-birding days are not the end of the world....shows what some people think they know dunnit! 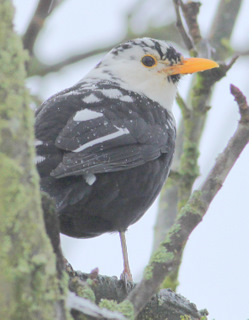 Blackbird. Phil Slade
An excellent photograph of the partial albino Blackbird which I found on Phil's blog prompting to remind me that I found 90 Blackbirds on Thursday 7 December on a birding walk from Lancaster to Glasson Dock, I reckon several more will have been missed and the true number was certainly into three figures. No doubt the harsh weather added to the winter visitor numbers mainly from Scandinavia. 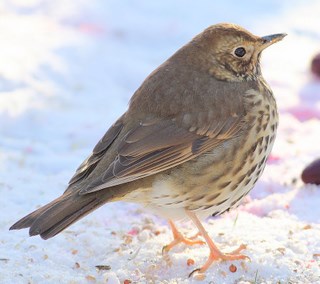 Song Thrush. Phil Slade
The Blackbird is a species at least five times as abundant as the Song Thrush in Britain and is one of our most widespread birds, its status varies slightly from area to area in this country between 'very common' to 'abundant', whilst the Song Thrush - which breeds across much of Eurasia -  is on the 'Red List' and in serious decline in the UK, especially on farmland where agricultural practices are - as ever - responsible. 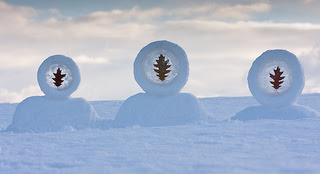 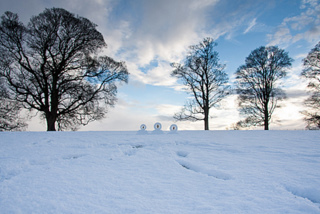 3 Leaf Ice Circles. Richard Shilling
At the beginning of the month RS created this impressive piece of Landart, but hes 'done' more since then and whether or not you've seen Richards 'Landart' before you should treat yourself to a look at his website for more amazing creations of his....you won't be disappointed.
I'D SOONER BE BIRDING!
Posted by Pete Woodruff at 22:12

You'll have to do some Garden birding Pete :-)

Good suggestion Warren but need a garden I'm afraid as we're not so lucky, though my family have created a small and humble little walled garden which attracts some nice records on occasions, like the Coal Tit which takes seeds to hide, then comes back several times to do it all over again, and two Song Thrush today....these are megas for our little lot you understand.