Moonbird has featured on Birds2blog before, but I was keen to get an update on this bird, but the nearest I got was of a sighting last year in mid-march 2015 at Tierra del Fuego which makes this remarkable creature at least 24 years old and one of the world's most famous bird's. 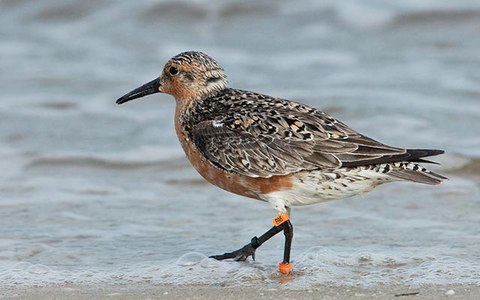 There are six Red Knot subspecies, this is B95, a rufa Red Knot, better known as Moonbird. Weighing a mere 4 ounces Moonbird has flown in excess of the distance to the moon and half way back in it's lifetime, during which the world population of Red Knot has declined by 80%, but still Moonbird flies on in his 24 years, just one year behind the longest known Knot of another subspecies of 25 years, begging the question....how does this one bird make it year on year when so many others fail. 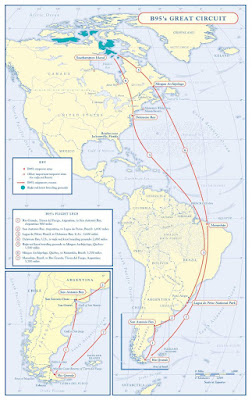 Moonbird was banded B95 in 1995 at Tierra del Fuego, and the amazing migration circuit takes him from Rio Grande,Tierra del Fuego, Argentina, to his breeding grounds, to return just a few weeks later to Rio Grande in Argentina, an epic journey of an estimated 18,000 each year....mind blowing. The map is best read enlarged 'clik the pik' to do this.

Food for thought....If birds were banned from the southern hemisphere, there wouldn't be enough food to support them in the north. So they've learned to spread out, and by doing so, they've maximised the world population of their species. The Red Knot goes to the Arctic because of the incredible amount of food there for a few short weeks, but they have to be out of there by August before the winter returns.

But there's a dark cloud over all this, the rufa Red knot population at Delaware Bay - one of the three top stopovers of the world - has crashed from 90,000 in the bay's heyday, to a catastrophic low of 13,000 today according to the Delaware Shorebird Project team, and this looming shadow of extinction makes B95's long life all the more improbable.

On 18 August 1959 a cannon netting excersise in Northumberland caught in excess of 1,000 waders, amongst them was a canutus Red Knot to be ringed, this individual was found more than 3,000 miles away in West Africa just five days later on 23 August.

Quote....To watch the flight of shorebirds that have swept up and down the surf lines of the continents for untold thousands of years, is to have knowledge of things that are as nearly eternal as any earthly life can be....Rachel Carson.

Thanks to BR for the excellent and appropriate new header on Birds2blog.
Posted by Pete Woodruff at 08:15

Email ThisBlogThis!Share to TwitterShare to FacebookShare to Pinterest
Labels: Knot

This is such an interesting blog post and I have learnt quite a bit from it, so thank you so much for sharing all the information. Cheers, Finn.

I could do a daily post on Birds2blog about B95 for a week or more, I'm pleased you saw this as interesting.

An Argentinian researcher who saw this bird through a telescope in the rain on Delaware Bay in 2009, called it 'the happiest day of my life'.

Thanks for looking in Findlay and for taking the time to comment.

Pete.This post is excellent full of very interesting facts about "Moonbird" The knot is one of my favourite waders to photograph in the large winter flocks along the Lancs coastline.Wonderful to think of the enormous distances travelled by these birds.Thanks again for an informative post and of course for the header.

Thanks for this Brian.

You really can imagine what the Argentinian researcher - above - felt when he saw this bird in his telescope and said it was the happiest day of his life.