Time On My Hands.

I had some time on my hands Friday afternoon, and decided the weather was perfect for a haul up the track to Birk Bank to walk across the summit and back down to Ottergear Bridge to return via the bottom track noting 13 species in the three hours there. 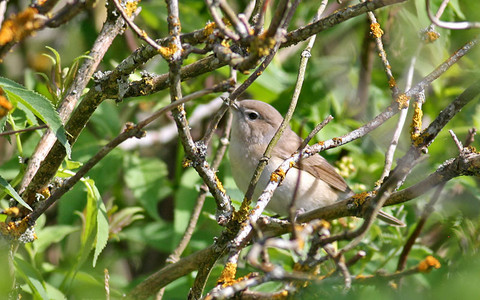 The car park at Rigg Lane was pretty lively and I had my third sighting of the Garden Warbler there, luckier to find this time than the previous two sightings as the bird gave itself away in full song then, today it was silent but I picked it up when I checked some movement in the trees. This bird appears to have bred here this year, it was carrying food in it's bill and was very active. Thanks to Jan for the typical view of a Garden Warbler.

Also noted here, 3 Robin two of which were juvenile which took a disliking to each other and were in a fight, 4 Blackbird, one of which was a juvenile, and a Willow Warbler.

I was encouraged on my way across the top of Birk Bank, when the first birds seen on my arrival were a pair of Stonechat, but the encouragement had died a death when I'd found no more two hours later. Decent numbers of Swift and Swallow went over in small waves, and a mix of at least 150 Carrion Crow and Rook were in the air over the ridge, 4 Meadow Pipit and a few Wood Pigeon over, with a Buzzard and a Kestrel the only two raptors seen to make up the 13 species.

A Meadow Brown was the only one seen on the perfect day for them....where are all the butterflies?

I observed some interesting Stonechat behaviour today albeit quite brief, when I watched the female of the pair - which were well separated at the time - go 10m into the air to fall and rise again, hovering for around 5 seconds before dropping back down. All this was a good part of the behaviour by a male in a song display flight, the female doesn't perform this display flight, nor does the female Stonechat sing in any season.

This was a first for me, and I can find no mention in any literature of this kind of behaviour by the female Stonechat.

Thanks to Warren for the excellent Spotted Flycatcher header.
Posted by Pete Woodruff at 10:53

I wouldn't mind seeing a Garden Warbler at Nethergong. A species I have yet to see there.

Hi Pete!! I was listening and photographing warbler in Madrid last month but now missing..:-(

Not 40 degrees in the Pyrenees Mountains Ana, we talk about it when you return....Enjoy and be Happy.

Not seen Garden Warbler at Nethergong, that surprises me Marc.