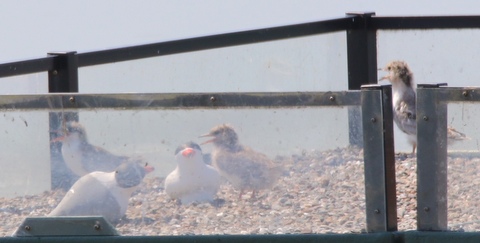 On Conder Pool Monday, 7 Common Tern, being the pair and three young, and two outsiders which are adding nothing to the population of this Amber listed species, but the three young on the pontoon will hopefully have fledged around 10 July. 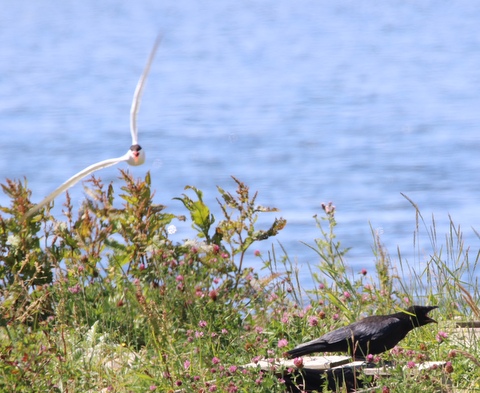 But there's still a lot of action around and about, a pair of Carrion Crow were paying attention to the contents of one of the boxes on the island, and actually appeared to be feeding on something, but the terns didn't like their presence and repeatedly attacked them.

Also on Conder Pool a Redshank with two chicks little more than a day old on Tern Island, Avocet still sitting on this island, the summer plumage Little Grebe seen again, and the lone Whooper Swan which is now established to have a foot missing.

I set off on a wander along the coastal path to Glasson Dock, to return to Conder Green via the canal tow-path. In the creeks, 6 Common Sandpiper seen, and along the coastal path a Whitethroat and 2 Reed Bunting noted. At Saltcote Pond, 5 Meadow Brown and a Small Skipper were the only butterflies seen in four hours. 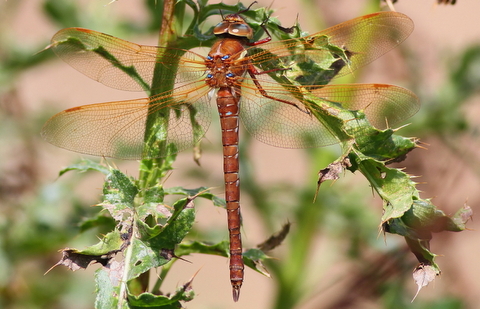 At Christ Church, a Brown Hawker was patrolling the floating vegetation on the opposite side of the canal. With it's all brown body, and amber wings shimmering in the sunlight, a glimpse is all that is needed to ID this brilliant hawker. In the woodland by the church, 2 Blackcap were a singing male, and good views of a more elusive female later....By the time I got back to Conder Green, I had seen 5 Emperor Dragonflies along the tow-path to Thurnham Mill.

Not seem my first Brown Hawker of the year yet, Pete. I must try harder!